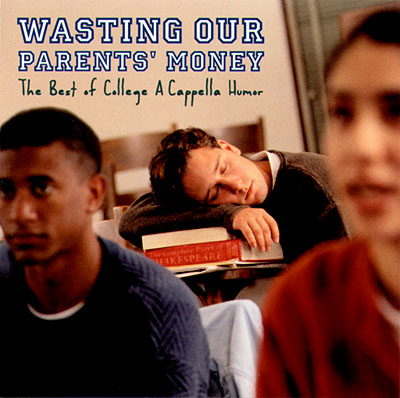 What could be tougher than reviewing music for its humorous value? Music is subjective enough as it is. Humor is considerable more so. But that said, I tried to rate the entertainment value more strongly than the musical for my overall scores. Often the two were aligned; that is, that the groups with the best sense of comic timing also possess the greater musicality. It's a collection: there's a wide range of talent and comedy. In the best light, you could say that there's probably a little something for everyone.

My biggest laughs came from BYU's Scottish Spring commercial. "With grit and sand and bits of broken glass to wash the dirt and the sins out -a- ya." The bag pipes are pretty impressive too. Also, excellent use of the word "McGunnies". The word is new; the meaning instantaneously clear.

Cheesecake Truck is cute. Worth listening to again; it's all in the charming delivery, but though I liked it, I could imagine it getting annoying pretty quickly too. Compare that laugh with the over-the-top style (but mostly copied off Spike Jones) of You Always Hurt the One You Love or the perfectly executed (pun intended) Masochism Tango. (Pain seems to be a theme on the CD.)

Speaking of pain, I found the Circumcision Blues to cut pretty much the way one might expect. There were opportunities for funnier snips but the writing basically stops right at the tip. Cute, but not enough.

Worthy of note: The 12 1/2 Days of Christmas. Standout musicality. Killer comedy. Also noteworthy is the truly kick-ass solo chops displayed on Prayer to the God of Partial Credit. If you're in the market for Rockapella style tenors, this track's for you.

Basically, if you like collegiate a cappella, you'll probably like this CD. It's not a sure bet, though. Chances are far greater that you'll find at least a few cuts on the CD to be fantastic, some just ok, and the rest as fodder for the fast forward button. But just think how great it'd be to spice up your a cappella mix tapes with an unexpected comedic lilt. Huh? Ya with me? All right then.

Someone less kind than I might wonder if these students are wasting only their parents' money... perhaps the album's purchaser's, as well? BOCA Humor presents twenty tracks culled from various college albums, the same albums, I presume, used to stock the regular BOCA (Best of College A Cappella) discs. In many of the tracks on Humor, this connection is present, but through a glass, darkly. Much of what makes these groups the best of the collegiate scene can unfortunately be lost in the farcical gambol through lighter terrain, and much of what makes humor effective (presentation, facial expression, audience response) is obviously lost in an entirely aural medium. What results is an amalgam which is sometimes quite funny, more often mildly amusing and sometimes rather lame.

(Here I get even more subjective, if possible: what's funny to me might be boring or even repellent to someone else.) Some tracks are real crack-ups: the Cheesecake Truck song is a lovely nonsensical romp (Farmboy?), Scottish Spring a delightful send-up of all those commercials we love to hate. Most effective to my mind were tracks like these: originals or parodies arranged by the group itself. Less effective and sometimes excruciating were humorous songs taken wholesale from other artists (One More Minute) and songs performed earlier and better by other college groups (Regretting What I Said, to be found with gusto and, dear god, rhythm in the soloist on Stanford's Mixed Company's Unanimous).

So: sometimes funny, sometimes stupid, but long enough probably to have something for everybody who has ever been to college and known people like these singers.

(I award average for tuning and soloists because of the sheer number of groups, some of whom shine and some of whom, although perhaps excellent elsewhere, here only squeak by.)

It's surprising how a good song can still shine, still stir something inside, even with its lyrics twisted into a parody of a Monty Python skit. Take, for example, I Ran, Penn Six 5000's take on the whole O.J. Simpson mess, to the tune of the Flock of Seagulls hit. If you block out the lyrics, then it's a pretty good cover. Listen to their twisted Conrad Bain (The Police's King of Pain), and you'll still feel the power of the original. Kinda cool. And the Conrad Bain lyrics are pretty funny, albeit R-rated for those with an aversion to that sort of thing.

But, after one or two listens, nearly every song on this album is just another old joke you've heard before. And not all of them were especially funny to begin with. So, "repeat listenability" is pretty low. Also, I would imagine that most of these tunes work best live, when the listener is hearing them for the first time. That dynamic is clearly lost on a CD.

Performance-wise, as this is a compilation, there is a wide range of quality. Some nice highlights: the lead on Masochism Tango, the "Mentos" themed Telephone Message, and The 12 1/2 Days of Christmas. These are balanced by a number of tunes with various tuning, blend and tempo problems. And, for random bizarreness, there's Cheesecake Truck, and the non-a cappella Basket Case, done with pitchpipes.

First of all I want to give credit to Matt Cohen for possibly the most creative, and "realistic" album design I've seen in a long while. Unfortunately the excitement ended for me at the album design. This album doesn't live up to the excellence that most BOCA albums present.

The few real bright spots on this album come from the groups that have had a history of being funny as well as top notch musical performers. I Ran by Pennsylvania Six-5000 is by far the highlight of the album. A great arrangement by Scott Harris put together with a great use of studio production makes this track a perfect lead track for the album. The Brown Derbies also add their flavor to this compilation with a very creative and well done original, Telephone Message. The Stanford Harmonies deserve credit for their creativity in using pitch pipes to perform the closing track, Basket Case, but unfortunately it's only a novelty and doesn't leave itself for any repeat listening.

The humor on this album is brought to the forefront in BYU Vocal Point's Scottish Spring. This hilarious parody of the Irish Spring commercial is just beaming with energy and creativity. Another humorous moment on the album comes from the Connecticut College Williams Street Mix with their track Walk of Shame. This description of the college "walk of shame" folklore is funny and almost eerily accurate...or so I've been told. <wink, wink>

As a whole this album fell short of what one has come to expect from a BOCA album. Musical excellence takes a back seat in this one and some tracks that aren't that good at all, but present the slightest ounce of humor, found their way onto this album. (i.e. Cheesecake Truck by UC Artist In Resonance and The Commercial by Stanford Fleet Street Singers) If you collect all the BOCA albums then go ahead and buy this album, otherwise save your money for something better.

I don't know for sure which songs are originals, who is being spoofed, who wrote the monologues and if the Green Day song is on pitch pipes because the liner notes don't tell me anything! But if Basket Case IS on a pitch pipe, (I tried it — VERY HARD!!) Matthew Kaufman you have a talent only someone in the a cappella community would appreciate. I await your solo album.

A big part of the "funny" in songs is performance, and with an album it is not possible to convey the physical humor that was probably used in a lot of these songs. Also, the humorous song pool is more limited than the general one, and this has compromised the quality of the album. In the future, I would use fewer tracks of higher quality.

This album definitely could have done without Tracks 3, 6, 11, and 14. That would still have left 17 tracks! Tracks 2, 5, and 7 were monologues (and I think the monologues should be saved for live shows anyway), so let's take them off too! That is still FOURTEEN tracks!

I was ambivalent toward Tracks 10, 15, and 16. Musically there wasn't much to complain about, a few pitch issues, but the songs themselves were blah.

My favorite track by far was Walk of Shame by the Connecticut College Williams Street Mix. Nice harmonies, sweet soloists, and the lyrics will be hysterical to anyone who has gone through freshman year of college. The other was Washington University Pikers' 12 1/2 Days of Christmas, which throws together a bunch of Christmas songs. There were some blending issues, but it was quite creative.

The mixing and effects on You Always Hurt the One You Love were great. The resulting sound was a song on an old radio. After a while someone tries to find a better channel (just commercials and dramas), but eventually turns back to the song. Unfortunately, the record starts to skip, but the problem is fixed before it gets annoying...almost. It won't be duplicated live, but I liked it.

The other tracks were good. They had great lyrics and/or were very creative. Some had soloists that were nasal, choral or flat at times. A few songs had great soloists that (near the end of a song) attempted runs that they should not have attempted.

BOCA Humor is guaranteed to make you laugh at least once. With 21 songs on the CD, there is definitely something for everyone. The musical quality is of greater range than the yearly BOCA CDs. There are a few real stinkers, and a few gems. I recommend that you buy all the yearly BOCAs first, and if you have money left over and want to complete the series, get BOCA Humor.