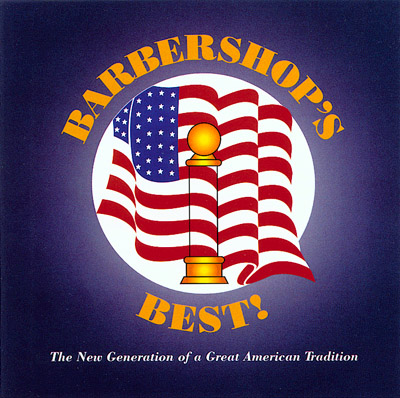 Barbershop's Best is just one of those titles that makes even fans of the genre wince a little. Bravado? Fluffery? Truth? There's a little of each here. All in all, this collection is a strong one with variations in style enough to please a variety of barbershop tastes.

Lead with strength is the motto here. Acoustix' This Is the Moment kicks off the collection in exemplary fashion. The classic barbershop swells and the perfect ringing chords enthusiasts seek like the Holy Grail are doled out by the dozens in these scant three and a half minutes. Talk about leaving a listener wanting more. And though the rest of the songs range from average to exceptional, no performance is quite as strong as this first one.

Strong standouts include Revival's Sentimental Gentleman from Georgia, a short sweet barbershop knock-out punch; Five-Oh-Two, Where Are You?, a clever little parody by Chordiac Arrest; and two epic barbershop works: Eine Kleine NOT Music and Excerpts from Rhapsody in Blue by The Gas House Gang and Ambiance, respectively.

For the barbershop enthusiast, Barbershop's Best is a fine primer: good tracks from a wide variety of groups. For my money, though, I'd just buy Acoustix' first three CDs. But if you already own those, and you've got some cash with barbershop written all over it, this is your lucky day.

Normally I'm quite open to compilation albums, especially from Primarily A Cappella. I'm also usually quite open to barbershop, although I'm not the biggest fan of the genre. So, imagine my surprise when popping in the CD, I find myself slightly bored by the music. This is supposed to be a "best of" collection that showcases barbershop music at its finest. While it is technically quite good, the first four tracks, which set the tone for the rest of the album, are not the most driving tracks I've ever heard. The best I can describe them as is lethargic. What this does to the rest of the CD is cast Barbershop's Best as a slow walk in the park.

This is a perfect album for barbershop enthusiasts who appreciate the music in any format. For the casual shopper though, they may want to rethink buying this album. Even if you hit the "random" feature on the CD player, you may come out with something similar in tone.

The problem in putting together any "best of" CD is that while you may have chosen fifteen or so outstanding tracks, they may be quite similar in tempo and mood. Then, when putting those tracks together, it may unconsciously blend into a single mass. Individual groups can keep this from happening on their own albums, since the good groups have diverse repertoires. Compilation album producers don't necessarily have this luxury, especially if their choices don't have that diversity.

PS: Why weren't Chordiac Arrest, Gas House Gang, or Ambience the opening track? Any one of them could have set the whole album in a different light.

Forgive me, but compilation albums always present a challenge for me to review, so let me get the basics out of the way right off the bat. There are no clunkers here. Every group can sing and sing well. There are both male and female quartets, and if you can get past the thinness of an all-female sound (which I admittedly have always had trouble doing), the women are equal singers and musicians to their male counterparts. The intonation is unfailing, the harmonies tight, and the rhythms crisp. Production quality is first-rate if you can forgive an annoying tendency toward excessive chorusing and/or reverb most noticeable at the end of almost every track (which I have to presume is a carryover from each group's source album). Overall, for quality vocal music, it's a keeper.

Here's my problem: is it barbershop? (And by extension, will you care if it isn't?)

Barbershop harmony is a style of unaccompanied vocal music characterized by consonant four-part chords for every melody note in a predominantly homophonic texture. The melody is consistently sung by the lead, with the tenor harmonizing above the melody, the bass singing the lowest harmonizing notes, and the baritone completing the chord. The melody is not sung by the tenor except for an infrequent note or two to avoid awkward voice leading, in tags or codas, or when some appropriate embellishing effect can be created. Occasional brief passages may be sung by fewer than four voice parts.

By this standard, which describes the bulk of the barbershop music familiar to me, I have a lot of problems with Primarily A Cappella's Barbershop's Best. Of the 16 tracks featured, less than half conform (in my musical opinion) to this definition of the genre. Sure, I'm all for expanding the boundaries of a musical style, but the more you stray, the more you bump heads with other established genres which have already staked out that territory. Crossover barbershop (which might be a good way to think of much of this album) could, at times, also be known as vocal jazz, doo-wop or even classical. Granted, an album of strict, strict barbershop might be less enjoyable, but tracks like A Foggy Day, Jeepers Creepers, I Got a Girl in Kalamazoo et al. make me wax nostalgic for the Andrews Sisters, Manhattan Transfer or more recently, The Real Group. Even more egregious, Eine Kleine NOT Musik and the marathon 8-minute-plusExcerpts from Rhapsody in Blue are almost note-for-note vocal reproductions (albeit with added lyrics) of their original instrumental source material — hardly barbershop — and tiptoe on ground already covered more proficiently (OK, without the lyrics) by The Swingle Singers (many times) and the King's Singers (specifically, the overture to Barber of Seville).

Then again, if it was all Coney Island Baby (not included on this album), I'd be asleep by the third track.

So is it really a barbershop album? Only sometimes. Will you care? Probably not. Enjoy.

I'm both surprised and pleased. Barbershop is definitely not my favorite kind of music, but I found many of the songs on this compilation, appropriately titled Barbershop's Best, to be quite enjoyable. The album begins with a beautiful, memorable version of This Is the Moment, weakens somewhat in the middle and ends with a great female quartet (who have an insanely high soprano) singing Excerpts from Rhapsody in Blue.

Highlights from the album include a gorgeous Long Ago and Far Away, which is an Academy Award-winning song from Cover Girl (Gene Kelly, Rita Hayworth — rent it), a cute medley of Disney's Jungle Book songs, and Eine Kleine NOT Music, which puts funny lyrics to Mozart's music.

The liner notes were very limited: a short blurb on barbershop, and a listing of each group, arranger, song and album. This makes for short, cheap booklets, but I think it does the groups an injustice. The BOCA and CARA albums include contact information for every group featured on the albums. While the CASA web site makes it easy to get a group's information, having an e-mail or web address right in front of me would have been nice.

Other than that, this is a good album with some great songs. If you like barbershop, you should own this CD, unless of course you already have the original albums. Even if you don't like barbershop, some of these tunes may change your mind. I'd say give it a try.

Barbershop fans, take note. Why is Barbershop's Best a must-buy? Not because you have to own it. No, it's extremely likely that you own most of the best tracks already. It's a must-buy because chances are, each of you has at least one person in your life who loves you dearly, but who thinks that you are one taco short of a combination for loving barbershop the way you do. That person has a birthday coming up, and you just found the perfect gift.

It's a rare a cappella-hater who won't listen in open-mouthed awe to Ambiance's Excerpts from Rhapsody in Blue. It's one of my favorite musical recordings of all time and still gives me goosebumps every single spin. If this track doesn't convert the anti-barbershoppers you know, nothing will. (Any a cappella fan who has not heard this track must. I won't bother to describe its magnificence. Just find yourself a copy of that song.)

Barbershop's Best is probably aimed primarily at fledgling barbershop fans, and it will serve them well. If you are intrigued by barbershop, but you don't know where to begin, this album's set list will guide you to the groups that are right for you.

Pop a cappella singers, especially those in college groups, could learn from this album, too. You won't believe the level of tuning and blend that is possible, and that is possible live. Acoustix, in particular, has such gorgeous blend that you'll think you're hearing four tracks of the same incredible singer.

Like every compilation, Barbershop's Best varies in quality from track to track. Highlights include the witty, well-done Eine Kleine NOT Musik from the Gas House Gang and the poignant A Foggy Town from the Bluegrass Student Union. On the other hand, some of the "beauty-shop" numbers highlight the challenges of all-female a cappella. While vocal goddesses like Ambiance are up to the task, it's a lot tougher to sound rich and layered with my favorite octave missing. The delightful Five-Oh-Two is marred by the poor live recording.

Available from Primarily A Cappella on their web site, by phone at 1-800-SING-181, or by email to harmony@singers.com