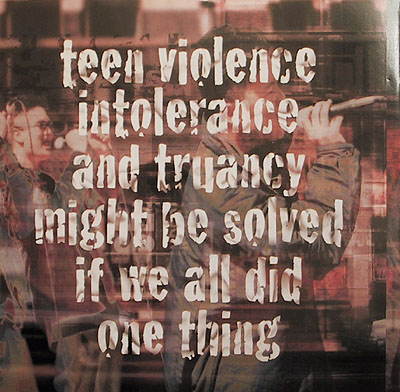 Here we have yet another a cappella compilation album. The Urban Harmony Movement (UHM) is an organization that started in 1995 in the San Francisco Bay Area. UHM helps to establish singing groups in high schools that have no organized choirs. This is a wonderful program. In an effort to raise additional funds, UHM has put together this compilation of a cappella songs.

This is a great compilation featuring well-known and not-so-well-known a cappella tracks. It starts out with a voice-over track describing UHM and introducing the album. There are great tracks here from such well-known professional groups as the The House Jacks, The Nylons, Bobby McFerrin, and The Persuasions. There are also some very good tracks from collegiate groups like The Amalgamates, Stanford's Everyday People, Stanford's Talisman (awesome!) and Penn Off the Beat.

There are actually very few weak parts of this compilation. I was less impressed with I'll Be Whatever You Want Me To Be (by Main Attractions) and with Always Be My Baby (by Stanford's Everyday People). They just didn't do it for me like the other tracks had. I didn't feel that they were as polished and clean sounding as the others. I'm also not a fan of the drum machine in The Nylons' track — pretty cheesy sounding.

All in all, I think this is a great compilation, one that you should own. If noting else, it's a very worthy cause that every a cappella-head should support.

How many chances in life do you get to help out a great cause and, at the same time, receive a quality product for your donation? Well, if you answered "Not many", your luck is about to change. The Urban Harmony Movement, an in-school program founded by CASA, has released an inspired album of R&B a cappella to raise money for the promotion of music in public schools, an admirable effort to curb teen violence and drug abuse.

The songs take a back seat to the cause on this album. It's no secret that funding for public school arts programs has always been appalling, and now, unbelievably, it's getting worse. I get to see firsthand the struggles of a public school music teacher trying to get instruments and support for his students. My father, as mentioned in my RARB bio, is finishing his 36th year as a public school music teacher. Trying to get playable instruments for his students is impossible, but trying to keep the interest of the students, in an environment without school support or funding for the arts...well, he's holding his breath for the instruments.

"An idle hand is the devil's workshop." This is quite possibly the truest statement in the English language. Getting students involved in the arts at a young age instills values, morals, confidence, and a sense of pride, helping to guide the student into making the right decisions in life. The greatest gain for the student is that the musical ability they gain in school doesn't end after they graduate and grow up. The same musical endeavors you participate in as a teenager are available to you when you're sixty years old. Unless you're one of a select few talented athletic individuals who get to play professional sports, your opportunities for participation in athletic competition gradually decline with age.

Okay, so I'm going to feel guilty if I don't talk a little bit about the songs on this album. There are highlights galore on this album from such established groups as The 17th Avenue All-Stars, m-pact, The Nylons, The House Jacks, Vox One, The Persuasions, and UPenn Off the Beat. I can honestly say that I was surprised at the level of quality in each track. CASA and the Urban Harmony Movement did a great job creating an album with a consistent sound throughout.

A few of the songs on this album have been highlights on other various-artist collections previously, but the majority of tracks are new and extremely refreshing to the ears. There's some outstanding solo work on this project is in Stay With Me Tonight, Respect, Drift Away, and Sister.

I don't want to take anything away from public school athletic or other programs. I participated in athletics when I was in high school, and continue to support them today. It just doesn't make sense that a program such as a football team that has 50 students participating gets easy access to public school funding, when a marching band with 130 students participating gets next to nothing. The schools should start to spend their money in a way that will allow it to reach the most students.

Please, for the preservation of music in our public schools, purchase this album. Give a growing student the same opportunities that all of us had when we were children. For the price of this album, you will be getting more than your money back in quality contemporary a cappella music, and at the same time you'll be helping the future a cappella singers of America find themselves and develop their talent.

Urban Harmony is a movement that began as an a cappella outreach program to public schools. The spoken intro track of Urban Harmony — R&B A Cappella describes the original program. The liner notes state that all proceeds benefit the Urban Harmony movement. On the CASA web site, Urban Harmony is described as being in a second phase, a "format that invites all members of the community to join together and spread `Harmony through Harmony'" No auditions are held; no musical background is required. In my opinion, the main thing this album needs is a printed disclaimer explaining the way the program has changed. I think people should know exactly what their money is going to support.

This compilation has wonderful contributions from groups such as Vox One, The Nylons, The House Jacks and m-pact. A crazy I Feel Good showcases the talents of Bobby McFerrin. The sultry and powerful lead on The Flirtations' Sister made it my favorite song. While the collegiate tracks aren't as stellar as the professional ones, they are not out of place.

The only incongruous track on the album is a thin version of En Vogue's take on Yesterday. It also happens to be the only women's track. I find it saddening (for the album and for women's a cappella) that in such a great compilation, Yesterday was chosen.

This album is a good purchase simply for the music. Of course, if you believe in the Urban Harmony movement as it is now, buying this album is also a worthy way to show your support.

The typical a cappella compilation has highs and lows, showcasing some terrific singers alongside some who shouldn't quit their day jobs.

Urban Harmony isn't a typical compilation. It's a dud-free collection of R&B gems with equal appeal for die-hard a cappella fiends and vocal virgins. Fans new to a cappella will enjoy the driving beats, faithful covers, and wailing soloists. Aficionados will appreciate the perfect tuning, diverse setlist, and creative arrangements. Everyone with a pair of ears will groove along with this stellar display of soul.

I can hardly decide which tracks to single out for special mention. The rich solo on Stanford Talisman's Back II Life? The irresistible energy of The Persuasions' Papa Oow Mow Mow? The superhuman creativity that is Bobby McFerrin? Even the tracks I loved less have plenty to offer and would be the highlights of a lesser album.

Featuring the best practitioners of old-school and cutting-edge styles, both collegiate and professional, Urban Harmony — not a BOCA disk — is the ideal first disk in a fledgling a cappella collection. It's a spectacular cross-section of what the human voice can do.

If for some reason you need an additional incentive to buy this CD, the clincher is that your purchase will benefit the Urban Harmony Movement. This not-for-profit program brings brings music into underfunded public high schools by involving students in contemporary a cappella. Fantastic music for you, fantastic music education for needy kids... Urban Harmony offers as much bang for your buck as you can pack into a jewel case. Do yourself and the kids a favor and pick up a copy.

Maybe R&B a cappella is your thing. It's not really mine. I find the genre to lean towards boring arrangements whose main purpose is as a framework over which a soloist can be soulful and do all sorts of backflips. (Don't get me wrong; I LOVE the soul and those backflips. The soloists can almost make me forget how boring the background is.) It allows for a lot of showcasing, but fewer tracks that will really grab your (my?) attention. And I found that this was true to some degree for much of this compilation album.

Fortunately, most of the time those backgrounds are right on, and the soloists are super-soulful and doing grade-A backflips.

A lot of the tracks just lose my attention. I have trouble remembering which one's which. They're good. Really good. They just don't stand out, and they tend to bore me until the last third of the song when the soloist starts getting _really_ into it. Most of the tracks have me interested by the end, but I forget them by the time the next song comes along.

Some tracks really shine. The Amalgamates' version of Man in the Mirror is the track that first got me into the 'Mates many years ago, and it still holds up against the best collegiate a cappella being made today. The soloist is awesome, managing to sound like the King (of Pop) while still clearly making it her own, and the background is well textured and highly energized. I could listen to the end of the chorus after the modulation forever. And if I wasn't expecting to be impressed by most of the arrangements on this CD, I certainly wasn't expecting to be impressed by one sung by a trio where one voice is soloing. But boy oh boy, did The Flirtations surprise me with their version of Sister. The supporting voices never bore, floating in and out of the foreground, joining and then backing the jazzy and, well, flirty soloist. The Nylons' Drift Away starts off with power and confidence, and just builds the energy and joy contagiously. And there's a live recording of Bobby McFerrin doing I Feel Good....no background (well, sorta kinda), just vocal backflips left and right.

There's a good amount of variety on the disc, which is nice. Perhaps too much? I mean, it's all over the R&B map from doo-wop to the blues to pop, all the way to the more-alternative-than-R&B-sounding Ya Gotta Be from Off the Beat. But the variety doesn't disrupt the flow of the CD, which transitions between styles easily. So if doo-wop isn't your thing, or pop isn't, you'll still find plenty of tracks to float your boat.

Like I said, R&B just isn't my thing. But it might be yours. You'd certainly be supporting a good cause by buying a copy of this disc (did I forget to mention that?), and you're bound to find a few gems that will make you smile.