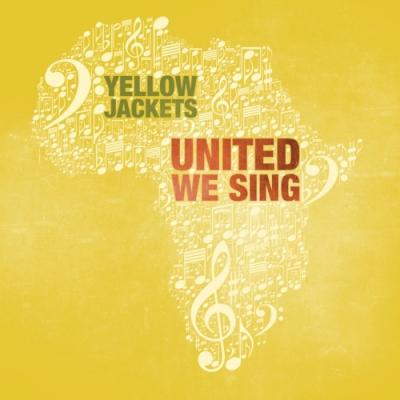 United We Sing is a very fitting title for the YellowJackets' latest release. Everything about this album exemplifies the power of the collective. From the inclusion of outside arrangers, to the featured guest soloists and background vocalists, this album embodies an energy that can only be exuded when there is a deep rooted purpose at the heart of one's singing. You won't find a shortage of energy or talented soloists either, which is common on almost every track. United We Sing is indeed a must-have.

The liner notes explain how this album is dedicated to and was inspired by the children the YellowJackets visited in Kenya. This trip influenced the album's concept as careful attention was given to production work, specifically the vocal percussion. The pulsating beat of most songs really helps to create a signature African sound for the album. Wavin' Flag is a great choice for this album's opener as it has a ton of energy and features guest artists from the Mbaka Oromo School Choir.

What helps to boost the quality of this album and makes it one of the best concept albums I have had the pleasure of listening to is that these songs have messages behind them. Awake My Soul goes from innocent to empowering, as the arrangement starts thinly and grows both dynamically and artistically. If You're Out There (opb John Legend) is more than fitting as the group transitions from a strong anthem-like feel in the opening to a more pop, soul vibe. The harmonies are really impressive and great to listen to with the strong lyrical foundation present in this song.

I Smile (opb Kirk Franklin) is my personal favorite on the album as the YellowJackets take a heavily gospel song and bring it back to a more serene state with simple opening bell tones. The song grows exponentially after the first chorus, helmed by guest artist Trey McLaughlin who has a very smooth and controlled voice.

But the thing that brings the album full-circle is the final track We Are the World, which boasts a star-studded cast of vocalists from various seasons of The Sing-Off. Featuring 24 selected soloists, each one's unique vocal color and texture transitions through the song with general ease. I will admit that I am more partial to the original '85 release, so I could have done without the inclusion of the rap section, but the arrangement by Ben Bram and Christopher Diaz makes the song enjoyable nonetheless.

With so many positive aspects about United We Sing it's hard to not give it a "5"; small issues ended up being the determining factor. More creativity could have been employed with tracks like Africa and One day. And I get the feeling that I won't be excited about every track years from now.

United We Sing is still very noteworthy, and it is a testament to crafting good music for a good cause.

We in the a cappella community understand harmony in a way that most people don't. It's not just about combining disparate voices to create a unified whole. It's about people working together, connecting with each other and their audiences. We can't trade in our vocal cords. We have to accept ourselves and each other exactly as we are and create music to touch the masses. The YellowJackets understand harmony in a way that is even deeper. United We Sing is a rare gem of inspiration and togetherness. It's a message of harmony expressed in its truest form.

The liner notes for United We Sing are too wonderful to be summarized here. Please purchase this album so you can read it in full. I'll simply address the audio content as best as I can.

The YellowJackets' spiritual awakening has resulted in a musical awakening as well. Every arrangement is carefully crafted and with a clear purpose. What's more, as diverse as the songs are in style, the tone of the album as a whole is cohesive. There is a lot of epicness in this album. Wavin' Flag sets the tone and you are not disappointed. Africa is the most satisfying arrangement of this Toto classic I've ever heard, complete with an inspirational rap break. Waka Waka shines through as my personal favorite, filling me with positivity ... and an urge to dance! Human, the mellow tune by The Killers, has become a full-on anthem. It's not the only one; Look Through My Eyes and If You're Out There both deserve a stadium filled with lighters held aloft.

Since this album was inspired by The YellowJackets' trip to Kenya, it's appropriate that they include Jambo and Webale as part of their track list. This is also a good time to mention the added aspect of this album. The YellowJackets include countless guest vocals from their youth program in Rochester and their friends overseas. This adds a level of credibility that would otherwise be sorely lacking.

I Don't Want To Change the World, Smile, and One Day provide a respite from the majesty of some of the other tracks, but are no less well-done. Every track is handled as if it were expected to carry the whole album. Even the simplicity of Awake My Soul keeps you enthralled.

We Are the World needs its own paragraph. This is an all-star cast. The YellowJackets invited nearly everyone from NBC's The Sing-Off to join them on this song. Members of groups of every size and style share the mic to create a sound that is as beautiful as it is meaningful. The singers aren't the only people of note. Acclaimed arranger Ben Bram makes his mark and the whole album is mixed by Ed Boyer. Chef Ramsay couldn't have made a better recipe for success.

United We Sing is a treasure you need to experience. 'Tis the season of giving, so give the gift of harmony. The performances are heartfelt. The arrangements are exquisite. The production is top-notch. Above all, the message is essential. The money from each purchase goes to charity. Do your ears, your heart, and the world a favor and buy this album!

This is not the YellowJackets album to purchase if you want an album that's going to show you what the YellowJackets can do. That's clearly not the point. In a test-case of my theory that the right liner notes can really make or break the intended tone of an album, the YellowJackets have spent a significant amount of real estate (at a shockingly large font size) explaining the purpose of this album. To wit, this album was conceived to highlight the children in Rochester, NY (Rochester City School Program) and in Kenya (Mbaka Oromo School Choir) with whom the YellowJackets have worked to support their music education. With 100% of the proceeds going to support education and music programs for children in need, this is the album you want to purchase if you enjoy a cappella with a purpose.

"Use your resources" seems to be a theme in the production of this album. The YellowJackets pulled in outside talent on the performance side (Trey McLaughlin in I Smile, basically everyone who ever appeared on The Sing-Off in We Are the World) and on the back-end (arrangements by Ben Bram, Christopher Diaz, and production by Ed Boyer, Bill Hare, the guys from Plaid Productions, etc). All this while featuring choruses and solos by the children in Kenya and Rochester that they worked with in order to support music education. It's a lot to take in, perhaps too much in some cases, but again, that's really not the point here. The point, the one the YellowJackets make over and over again in the notes to this album, is the value of music education to change lives. That simple.

What's not simple is how to then criticize and evaluate an album with this stated goal. There's a spirit captured in this recording that is very compelling. Tracks like I Don't Wanna Change the World and Waka Waka exude enthusiasm. Webale, a traditional Kenyan song, is rich and serene. But there's not a lot of innovation with this album; arrangements are traditional, unsurprising even (though Aaron Sperber and Jamal Moore get points for the first arrangement of Africa that hasn't made me want to throw something across the room in fifteen years). Moore's solo on If You're Out There is the high point of the album. Gripping and emotional, it made me wish that the passion Moore infused into this recording had translated across the rest of the tracks.

The album ends with a Sing-Off star-studded recording of the USA for Africa plea We Are the World. Despite including some of the best soloists we have in a cappella, there is just no getting away from the inherent cheese embedded in the composition itself. The chorus builds to a great height on just the fumes of the great talent included, but tonally (not music tone, but overarching thematic tone) it just makes me cringe. To the group, it might have made sense to include a recording of this song on this album. But I couldn't get images of Michael Jackson trying to save children out of my head, and that's really not how this valuable project should end.