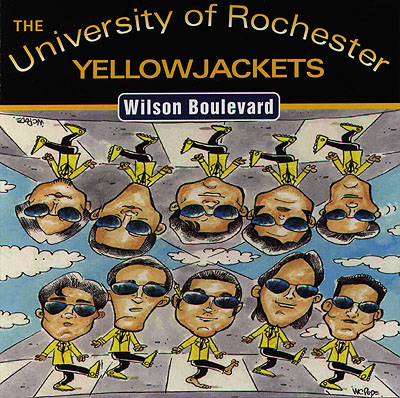 The short review of Wilson Boulevard is this: if you liked the Yellowjackets' Yellacappella, you won't be disappointed here. Your mom will like it too — if anything, the song choices and overall sound on this album are even milder than on their last album. My first look at the track listing filled me with a sort of deja vu — these guys must love James Taylor (only one JT track this time, though they manage to fit a snippet of Handyman into Karma Chameleon, of all songs) and America. Six of the ten members from Yellacappella return for this CD, and it shows in how tight their sound continues to be. Blend and tuning are consistently excellent, and the sound is full — I see collegiate groups with upwards of 16 or 18 members, and I want to make them sit down and listen to the Yellowjackets, so they can see what just ten guys can do.

Pretty much every track has something to recommend it. Even though no track truly rocks (well, Footloose comes close enough), they all had me tapping my foot or bopping in my chair. The only exception to this is Dust in the Wind which was somewhat of a disappointment — although precisely performed, the rhythm comes through so subtly (lots of muted "doo"s), it's hard to get a handle on the tempo in the background. The two jazz tracks are tight — the infectious Birdland is a great closing track for the album as a whole. Aside from those two, the rest is your favorites from the '70s, '80s, and today, but I'd much rather listen to the Yellowjackets do these songs then hear them on my local adult contemporary station. Tell Her About It worried me for a second — I wondered what they could possibly do with that song to make it not a cliché, but they surprised me with some unexpected harmonies. Percussion throughout the album is appropriate yet unobtrusive. Overall, the Yellowjackets have carved out a niche on the more traditional end of the a cappella spectrum, and they serve as a shining example of picking what you do and doing it well.

Hey everybody! I just heard a good album by a college group! The University of Rochester Yellowjackets have a polished sound and style to boot. Good soloists, good energy, good songs with good arrangements. Hard to go wrong, unless you don't like the songs. But with this blend of classic rock, pop and '80s tunes, I don't see that happening.

These guys really sound tight. They have great tuning, blend, and balance. They obviously worked hard together in the studio. The payoff is a classy album that has little wrong with it. The engineering is very well done, with great balance and effects that aren't overdone or inappropriate. The soloists were great, and sometimes sounded eerily like the original artists. The percussion was well placed in the mix, though I have certainly heard better percussionists. But then again, the Yellowjackets don't need to rely on a good riff to sound talented. A few songs worth mentioning for their quality would include That Cat Is High, Dust In The Wind, and Birdland.

Hey 'Jackets, don't be surprised if this album gets some positive recognition from CASA. I certainly think it is deserving of such recognition. It certainly deserves a first or second listen from you. Get this album... you won't regret it. 'Nuff said.

You name it, these guys do it well on this album: Jazz. '80s pop. Classic rock. Vocal percussion. Well-picked soloists. Contemporary radio-play music. Clever but tastefully sparing added effects. They are tight, energetic, talented, and well-produced.

The Yellowjackets have obviously been working hard since their last CD. There's a nice mix of arrangement styles, and their song selection is better this time around. Their ballads are delicate, the uptempo numbers are kickin', and tuning is impeccable. Percussion is well done and never overpowers, a nice complement to the harmonies. Soloists are great, but even more impressive is this: every single guy in the group gets a solo, and they are all fantastic. Soloists carry each tune, and backup parts never overpower or steal the thunder.

Since their previous album (Yellacappella), they have addressed their few problem issues. Blend and production remain tight, soloists bring emotion, arrangements have gotten more inventive, and the overall result is fantastic.

Here's my only concern for future recordings: 8 of these 10 guys will be graduated by the spring of '99. Hopefully the new recruits can learn from them before they hit the road and keep the group rolling into the years to come.

I do not give scores like this often, but this one is deserving. Get this album, 'cause it's gonna win some awards this year. No question in my mind.

Once again, the Yellowjackets have produced an album which admirably showcases their fantastic sound. Everything from sublime blend to dead-on timing and interpretation marks most of the songs selected here. As with their previous album, the 'Jackets show a great deal of creativity not only in song selection, where they stray from the "'80s only" feel followed by many groups, but in their arrangements, which always shoot for some sort of uniqueness to make even the most repetitive songs (read: all songs) interesting throughout. One thing I am most impressed with is their VP: solid! Great! As I said before, "quit your day job, Joey Chen".

All that said, some specific things could of course stand work. Rhythm can be a problem, with timing slipping between voices on some tracks. As with many groups, blend works against the 'Jackets at times, with soloists getting a little lost in the shuffle. As far as song selection goes, I've already mentioned how the group shoots for variety, and performs well with most styles. Where a more rockin' feel is required, the 'Jackets can fall a little short, sounding altogether too choral and well-disposed for Footloose (although the VP rocks) and perhaps Tell Her About It. Their superb blend lends itself to lush atmosphere on Ventura Highway etc., and makes jazz a good choice as well (although Birdland seems to falter).

So, a fantastic album. Not all of the tracks are on the same footing, but their is obvious effort and energy throughout. I highly recommend this album.

Having previously reviewed the Yellowjackets previous effort, Yellacappella, I was both excited and nervous when I received this new recording — excited to hear whether or not this would capitalize on their previous recording's strengths; nervous because I was still trying to figure out whether it was less filling or tastes great...

The track list on Wilson Boulevard is tighter than Yellacappella; each track sounds like it fits perfectly into this offering. Even Karma Chameleon, arranged by Ian Sanchez, finds its niche in between the folk rock Mexico and the jazzy That Cat Is High.

Each track has a polish that is rare among collegiate, and even some professional, recordings. Brian Scharfenberg, who continued his previous solo success with Mexico, is joined by the rest of his 'jackets in offering excellent solo efforts. The arrangements are fresh and performed with enviable verve. What these guys do with only 10 voices is a great case against the practice some groups use of creating near-glee club size groups; their incredible economy in using these resources creates a subtle groove that allows the listener to appreciate the full effect of the recordings.

In my opinion, this has got to be one of the finest collegiate CDs out there, bar none. You've got a toe-tapping 36 minutes worth of recordings with no wasted space, excellent tuning, v.p. that does what it suppose to — complement the track and not knock you over with its presence, and a wide ranged repertoire arranged in such a way that not one sticks out. I may be committing a cappella blasphemy, but the Yellowjackets, in the '90s, may rival the Beelzebubs of the '80s. The Yellowjackets have played this recording right, and in the end, as I've said before, with only ten tracks, I'm left wanting to hear more...the way it should be.