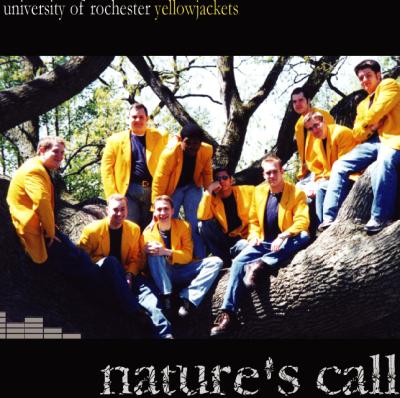 The Jackets are a venerable institution out of Rochester. On Nature's Call, they have put together a good album that shows them better at rock and pop than jazz.

The group seems to aim for a non-classical, poppy, or edgy sound. Sometimes they succeed (Flood, but see below). But at other times the efforts are not spread evenly across the voices (e.g. opening to Stand By Me, with a laconic walking baritone and a pinched soloist joined by curt backing voices ... although the blend gets better later on, the baritone never seems to be part of the same song).

As I often do, I wonder if this has more to do with engineering than anything else. On some tracks, effects, even crucial ones like reverb, are limited to the soloist and one or two other voices; the result is jarring (e.g. the interesting Flood, with deep echo on the lead contrasting with a flatly naked bass). Whatever the immediate cause, what results is a sense of conflicting musical interpretations.

Some songs are better in all these regards. The daring, charming Kiss and Say Goodbye has a better balance of voices and VP, with a nice buzz to the bass and the backing voices (if occasionally a waver in the lead). Standing Outside the Fire is a driving tune, excitingly arranged with rock-style harmonies to the lead. And In the End is close to a revelation, especially in timing and rhythm: dramatic from the beginning but still building to a roaring, flanged chorus, losing points only for the thin soloist getting edged out by the backing voices.

A good album from a group that has become a reliable standby in the industry; worth picking up.

Nature's Call is the fourth Yellowjackets album I've reviewed in as many years. While the group has had its ups and downs, I'm pleased to report that the newest release continues the upswing shown in Darwin's Gambit.

The group's greatest strength, and greatest area of growth in the last four years, is in block energy. Every single comment from the chorus is sung with conviction and zeal. The Jackets have fun with everything they do, from inserting frat-boy humor into backing syllables to singing solos. They successfully experiment around with trite old songs, adding suspensions to Stand By Me and a celebratory feel to Mack the Knife.

Despite the varied setlist, The Jackets tie all the tracks together with a distinctive sound, marked by bright, forward block work and an arranging style that pays homage to traditional doo-wop. That style only fails them on a couple of songs. Everything Happens to Me sounds draggy because its cheerful color doesn't mesh with its downtempo mood; Kiss and Say Goodbye sounds like one of those numbers that brings the house down live and falls flat on disc. Those tracks aside, the group bounces right on through the short 30 minute set and leaves me tapping my toes.

My big complaint is with the way parts are balanced. No matter how good a job the block is doing, I don't need the T2's and baris blaring the chord progression into my ears at the expense of more interesting moving parts. On Stand By Me and In the End, they practically drown out the solo. Percussion and ornamental tenor parts are mixed way too far back. It's like listening to a concert where the Pips elbow Gladys aside and grab the mike for themselves. I've mentioned this in my previous reviews, so maybe The Yellowjackets just like it this way, but a group that records every year always has another chance to tweak the sound. Maybe on the next one, guys? I'll be listening.

How far the Yellowjackets have fallen.

A quick glance at past reviews will show that their recent albums have declined a bit from their glorious late-'90s peak. I own several of their CDs and can corroborate this. But nothing could have prepared me for the travesty that is Nature's Call.

Except on the opening Mack the Knife, which is really quite a good track in every way, the album is just not in tune at all. The blame for this fact seems to rest mostly on the basses, who can reach amazingly low notes (including an un-octavized low B on In the End) but have a hideous, throaty tone and consistently flat delivery. This is not to say that the baritones and tenors do a great deal to help the situation. The group doesn't match its vowels either, and that dreadful bass section kills whatever little blend the upper voices are able to achieve.

Production doesn't help matters either. The in-your-face sound of the backing vocals reveals that each singer was individually miked, which is exactly how college a cappella groups should record; in addition to adding presence, it allows the engineer to clean up tracks with AutoTune. Yet said software is nowhere in evidence on Nature's Call, for reasons I can't fathom. I'm not saying AutoTune can turn a disaster into a masterpiece, and it is far more often abused than underused, but in this case it would have gone a long way toward making the disc somewhat listenable. The mix is a mess, with singers fighting each other tooth and nail for the same space in the audio spectrum. And, as on past Yellowjackets CDs, the backing vocals drown out the solo on nearly every song.

Rob Gellman and Matt Spada are the standout soloists on this disc, delivering nice turns on Stand By Me and Demons, respectively. Nick Berry sings Kiss and Say Goodbye with the same ugly tone he gives his bass lines. The rest of the guys are serviceable but unexciting.

As lousy as this album is, I am confident that The Jackets will come out of this rough patch. Here's why: the album's most prolific arranger, Matt Young, was a freshman when the disc was recorded. Music director Dave Marvin, who wrote the rest of the arrangements (save two penned by alumni), was a sophomore. Both of them commit typical rookie errors like overuse of block chords and awkward background syllables. But both clearly have talent. Young, inexperienced leaders who will be around for a while typically mean future improvement.

But in the meantime, I can't recommend this disc to anyone. Even diehard Jackets fans should skip this and pick up Wilson Boulevard or Common Time instead. True to its title, Nature's Call is a piece of crap.