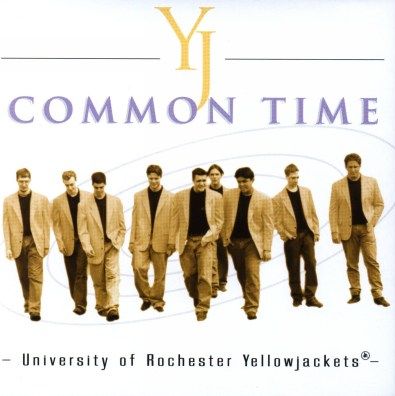 The Yellowjackets have put out two fairly solid albums in as many years, and no doubt are hoping for a hat trick with Common Time. This third disc shares many of the virtues of the previous two albums, including smooth harmony and a mellow, unhurried approach to different styles of music. That said, the 'Jackets still somehow sound as if they don't have the musical chops suited to some of their music. Nice to a fault, they never really rock.

I'm not sure if this is due to the group's composition or to their time in the studio. Although the production is smooth, and each track has, again, a mellow shine making the most of the guys' close harmonies, there is 1) basically no bottom and 2) only muted percussion. To judge from the liner art, half of the group is bass/baritone, but to judge from the sound, at least three-quarters of the group signs tenor (and often quite well, clear even at the highest). A little more bass in the mix might have fleshed out some of the more driving songs. The same holds true for percussion, noted as shared among three singers but sounding as if only hesitantly agreed to by the group as a whole.

This is a back-and-forth album for me: the harmony is good, the group sounds good. The album for my tastes is best mixed in with a couple of others and set to "random", rather than experienced straight through. Missing only a bit of oomph here and there, this is a very good album by a very good group, inches away from great. Bassier, brassier mixes, more thumping, and less "doo-doo" will go a long way to crossing those final few inches.

The Rochester Yellowjackets have been putting out a steady stream of solid recordings since I first had the opportunity to listen to their material two years with Yellacappella. Each CD I've reviewed has been a solid case of tight harmonies, full arrangements, and the minimalist procedure as far as material is concerned. Where other groups will put anywhere from 15-20 tracks on a recording, the Yellowjackets will put on TEN quality tracks.

Once again, they meet all expectations with ease, eschewing the James Taylor covers this go-round. Likewise, you have to admire a group of ten that can put out such a solid offering.

This album is definitely solidly in the soft rock mold, heavy in '70s and '80s covers, with only a couple of '90s hits. One of the '90s songs is a cover of a big band hit that translates to a cappella well, but not powerfully.

The only other ding that I can throw a flag on is a solid though not strong attempt at Edwin McCain's I'll Be. The original is a personal favorite of mine because of the vocals. Connor O'Brien didn't quite set off the same emotional intensity that I remember from the original. It's not bad, but it is definitely a vocal challenge not quite met.

On the flip side, there's a lot to like on the album...a strong opening with Stay (Ian Sanchez has four VERY complete arrangements on here), two very strong solos from Brian Scharfenberg (including a near dead-on likeness of Michael McDonald), who just continues to impress me every single time, and a run of songs that are all equally toe-tapping regardless of the minutiae that may separate them.

Final analysis: this is ANOTHER excellent album from the University of Rochester. Can't they just be bad once? Not to my ears...I've said it before about their albums, I'll say it again...BUY THIS ALBUM!!!

I remember the last time the Yellowjackets received a perfect five on their album. I was like, "What? Are you serious? I've never heard of these guys! Where did they come from? Who are they?" Let's just say that Common Time has put my questions at rest.

The Yellowjackets are unequivocably tight on this album. Their sound is fresh, clean, and pure. They sing their songs with energy and a decent sense of style, if not funk. Their timing is impeccable, as is their rhythm. The production on this album, while not avant garde or particularly innovative, works well with their sound. Additionally, the Yellowjackets have provided us with a well-designed, usable set of liner notes (thank you!!).

My problem with this album: the soloists could stand to rock some more. The first two soloists on Common Time are both kind of meek and, uh, wimpy. I dunno, maybe they're supposed to sing it that way, but it kind of contrasts against the energy of the song (especially with regard to Stay). On the opposite end of the energy spectrum, Connor O'Brien kicks ass on both the rock'n'roll classic Whole Lotta Lovin' and even the slower-tempo'd tune I'll Be. Brian Scharfenberg performs Richard Marx's Now and Forever with such feeling and sensitivity that he totally saves the sentimental song from its scary origins. I'm not sure if he was quite the right choice for Taking It to the Streets, though. Again, a case where the energy of the arrangement doesn't quite match the more languid delivery by the soloist.

Aside from the weird contrast of energy between solos and arrangements, this album actually got quite a bit of airtime on my deck, which is pretty rare for me. This is an album that I unabashedly recommend to the a cappella listener, regardless of musical preference. Enjoy!

The Yellowjackets from the University of Rochester have released another album that affirms that they'll remain one of the most superlative groups in college a cappella. Flawless arrangements, tight harmonies, creative style, good intonation, musicianship, and 38 minutes of a cappella fun. Who could ask for anything more? I could.

This album is every bit as good as the Yellowjackets' last project, Wilson Boulevard, but that's just it! They haven't done anything different. No expansion, no musical risks, no creative advances ... same ol' Yellowjackets, different album. Some may say that's a good thing. I'm sorry, folks, but music, especially a cappella music, is dynamic, and we need to capitalize on it. The groups that aren't afraid to take a few risks will eventually pass by groups that keep releasing album after album with the same sound and the same mainstream track lists. I'm not saying to change everything that you're doing; you can start subtly with a song or two. I'd like to see some of the top collegiate a cappella groups like the Yellowjackets quit doing full albums of cover songs and write a couple of original songs. Surely with all of the talented arrangers in collegiate a cappella, we can get some first class original songs.

Ok, enough editorials ... now let me tell you about all the great qualities of this album. I want to take Connor O'Brien and Dave Wagner and hide them away in a cave so that I can have them for all of my future a cappella projects. These two guys are the Tenor I section for the Yellowjackets and they wail. I haven't heard top tenors this solid on any other collegiate a cappella album ever ... no question ... ever. Maybe the mix is fooling me, but I highly doubt it ... the best ever.

The only two songs in the track list that I didn't like were Stay because I hate Dave Matthews Band, and I'm a Believer because it didn't fit in with the rest of the album. This Neil Diamond classic is boring and has been done by countless collegiate groups. The arrangement didn't help much either; it was over-the-line cheesy.

Something I found a little odd on this album was that either Ian Sanchez or Edward Getman, both Yellowjackets alumni, wrote five of the ten arrangements on this album. Unfortunately for the future of the group, their arrangements were also the best ones on the album (Stay and Sweet Home Alabama).

I'd like to adore Common Time. It has a great natural vocal style, beautifully executed. I can't say enough about the tireless care that clearly went into the disk. After several nit-picking listens, I couldn't find a single flawed chord. There is no substitute for hard labor in rehearsal, and the Yellowjackets take no shortcuts. You can hear every minute of the honest sweat that went into the flawless unison slides in Zoot Suit Riot and the luscious blend on It's Still Rock and Roll To Me.

It's all the more frustrating, then, that a couple of problems turn up, keeping this album from reaching the pinnacle where the Yellowjackets clearly belong. First, on almost every track, the most boring, repetitive part (like the "wa nu wana" on Stay) is turned up the loudest, making the arrangements seem more boring and repetitive than they actually are and accentuating the block's nasal vowels. Worse, the mix drowns out parts I really wanted to hear more of, like solo riffs, the bass line, and in some cases even the lead vocal. When I hear this kind of mixing, I immediately suspect that the group is trying to hide weaknesses, but for some reason the producer is hiding solid bass lines and terrific ornaments.

This habit of mixing down the most interesting and spirited parts of the songs contributes to the second, more serious problem, which is the frosty precision of many of the block performances. Keeping perfect accuracy without sacrificing emotion is one of the classic challenges of a cappella, and the Yellowjackets are wrestling with it. Several of the tracks , especially Taking It to the Streets and I'm a Believer, have a slightly mechanical quality, as though the block is making a training tape to teach the arrangement to others. On Sweet Home Alabama the block tries to force energy by punching the "doos" at the beginning. But on the songs where the block sings from the heart (like Whole Lotta Lovin', Zoot Suit Riot, and I'll Be), the results are spectacular.

I've focused on negatives here solely because the problems are so fixable and the Yellowjackets are within spitting distance of greatness. I think every young all-male group should get this album just to hear the level of discipline that's possible. I own some less precise albums that have more pizzazz, but this level of perfectionism in rehearsal is so commendable and so rare in college pop groups that everyone could learn from it, and I hope they do.

A final thought: Only arrangers and lead soloists are credited in the liner notes, but check out the lungs on the guy singing descant on I'll Be! You'll agree he ought to be congratulated by name.

Common Time is available online through Amazon.com. Visit The Yellowjackets' web site for instructions on ordering from them directly.