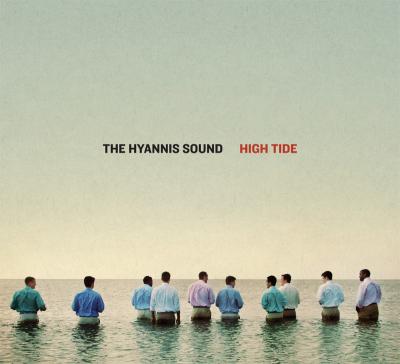 Hyannis Sound has long been known for its roster of excellent soloists. High Tide carries on this seemingly impossible tradition. Though not quite up to the bold brilliance of On the Clock, nearly every track delivers an excellent lead that rivals the talents of the original artist. The arrangements keep the energy moving and avoid all the syllabic land mines (check I Wanna Dance With Somebody for active, but unobtrusive syllables); the editing removes all unsightly blemishes, yet leaves us with the singers' humanity; the production covers all the usual bases and never gets in the way. If excellence requires effort, Hyannis Sound is the height of efficiency. They don't need excellence in all areas: great leads over good tracks gives you great tracks.

Where most collegiate groups struggle for even one killer lead, Hyannis Sound (not exactly a college group) boasts this embarrassment of riches: Alfredo Austin III, Nate Tao, Colin Eagan, Brian O'Shaughnessy, Joe Whitney, Kevin Pidgeon, Brendon Mason, Phil Landry, Seth Ohrn, and Jeff Eames. Each brings truly impressive talents to their solos. What they all share: passionate delivery. High Tide owes its success to their exceptional skills above all else.

The only thing High Tide doesn't deliver much of is creativity. The arranging/production/musical aesthetic leans more towards utilitarianism. These are good time, rocking tunes and a few touching ballads. But they won't demand your undivided attention or take you on a journey of self-discovery. You can pay attention or not and either way, you'll still enjoy the tracks. This is because the group never strays from the inherent formulas underlying the success of the original tracks. So you always know just what's going on and what's coming next.

One last kudos: it's groups like Hyannis Sound that set the standard for many collegiate groups. Let's hope to see more classy liner notes like theirs. Hyannis Sound credits everyone including soloists, arrangers, the original artists (OPB), and most importantly, all the composers. That's how you do it.

High Tide is, from a technical standpoint, one of the best all-male albums you're likely to find this year. It's well sung, in tune, and features lots of great dynamic moments. The trouble is, at this point in the group's career, I've come to expect much more from Hyannis Sound than just technical excellence. This album doesn't excite me, not because it's not empirically great, but because it's missing a lot of the spark — that forward-thinking, playful-minded virtuosity that lets you know from beat one that you're listening to Hyannis Sound.

A quick look at the liner notes reveals no one credited as producer of the album and, while I doubt that's actually true, it really is what the resulting sound suggests! High Tide sounds like the group took its favorite songs from a couple summers, tracked them as is, had them mixed (very well) by Ed Boyer, and put them out for fans to enjoy. The end product is great by virtue of the fact that everyone involved is too talented for it not to be, but this is a group that has proven itself to be not only talented but also visionary.

Part of the appeal of the Sound is that the group rarely shies away from showing you just how good it can be under the right circumstances. Once the annual bootleg album became a yearly tradition, the guys were freed up to have a full-on party in the studio, and we were treated to gems like the intro to Foreplay/Longtime (On the Clock), the barely recognizable, but so radio ready Boys of Summer (Route 6), and the four octave spanning Get Set (Shirt, Tie, Khaki). High Tide for all its merits, sounds like a more-or-less verbatim studio imagining of the group's repertoire. It doesn't take any real chances with the material, and as a result misses some of the "look what we can do" charm that has elevated so many of the Sound's previous releases.

Ok, enough hating. Just because it didn't match my (admittedly stratospheric) expectations doesn't mean that there isn't a lot to enjoy here. Soloists are great, as usual, and really the dynamics are off the chain. Both subtle swells within parts, and dynamic jumps between sections really shine and reveal thoughtfulness on the part of the group about the dramatic arc of each song. Boyer's mixing is also, as usual, excellent.

This album essentially feels like a Hyannis Sound yearbook album, which is all the more unnecessary because this group actually does release a yearbook album each summer! By now Hyannis Sound is probably incapable of being anything but great, but it has some work to do if the group wants to get back to the highs that it has been able to engineer in the past. The arrangements need to take more risks in the studio, and the guys need to take more pleasure in being the best. Casual fans will enjoy High Tide. Long-time followers of the group and a cappella nerds will probably keep spinning On the Clock for now.

Hyannis Sound's latest offering, High Tide, confirms — as all of the group's recordings do — that these guys are some of the best of the best male singers around. There's not a single solo here that sounds less than excellent (if you don't already know names like Alfredo Austin, Kevin Pidgeon, and Phil Landry, please learn them now), and the backs are in step, in sync, and in tune. High Tide exudes polish without blatant studio wizardry, and it makes you believe that these guys actually do sound exactly like this when they perform. All of this goes a long way towards making this album incredibly easy to listen to.

If you're waiting for the "but", here it is: some listeners may want more than "easy", and they won't find that here. Hyannis Sound's repertoire skews towards older artists (the Four Seasons, Stevie Wonder, the Doobie Brothers) and/or tender ballads. That could be as much due to their clientele and performance schedule as anything else, but these songs just feel safe. Arrangements feel the same way: solid, good, enjoyable, but not great, and a few of these songs are one jazz hand away from some serious schmaltz (Long Train Runnin' and Part Time Lover are the biggest culprits).

Of course, there are some great moments here: Phil Landry sounds fantastic on Heart of the Matter, and We All Need Saving is basically damn near perfect, thanks to Kevin Pidgeon's heartbreaking solo and the impeccable phrasing of the backing voices (attention everybody else: this is how you do dynamics and extended chords). Every "i" is dotted on this album, down to the liner notes which credit the original performer as well as the songwriters. This is what we expect from Hyannis Sound, and there are no surprises when the group delivers it. But sometimes, "no surprises" ends up a little boring: oh, yet another cover of Use Somebody? And songs by John Mayer, John Legend, and Journey? These are things we can find on any collegiate album, and while these guys do them better than most, this unfortunately won't become a go-to album in my a cappella collection.

That's not to say that High Tide is bad — far from it. It's a solid album, it sounds good, and it's the kind of recording that's instantly enjoyable from the very first listen. It's also really, really safe, and that's its only weakness: these guys are strong enough to be able to take a few risks, and it's disappointing that they don't.