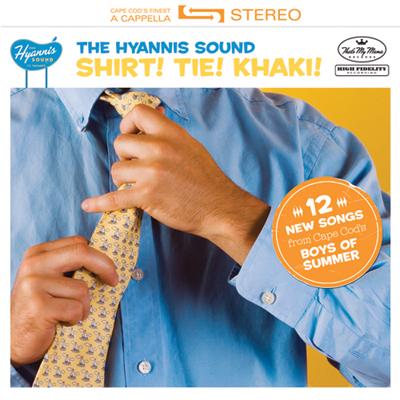 Screaming girls of Cape Cod, rest your weary souls — the boys of summer are back with their latest album. Shirt, Tie, Khaki is full of really good, even great singing. But it sadly lacks the transcendent moments that have made past Hyannis Sound songs can't-miss listens. This is an exceptionally competent album, just not a particularly charismatic one.

Whereas Route 6 flipped skillfully between joyful exuberance and emotional resonance, Shirt, Tie, Khaki is content to bop the whole way through with John Clark-assisted shininess. We don't see many of the creative risks (covering the Pointer Sisters) or twists (pretty much anything arranged by Samrat Chakrabarti) that previously enamored. It's a safe track list of a cappella classics both traditional (Easy, Carolina In My Mind) and budding (Change The World, Chariot, and anything by Ben Folds), leaving this listener to shrug in relative indifference.

At moments HS does start to take flight — the textured effervescence of Get Set, Andrew DeLong's Rocksteady scat, and the dark pathos of Ready For Love. But they're quickly brought down to earth with an occasional lack of commitment — the faltering jazz bridge of Virtual Insanity, a listless breakdown on Change The World, and a stilted Keane cover ... plus a host of well-sung but undifferentiated covers. With singers this good, I'm sure it's hard to push outside comfort zones. But some more creative arranging and a bit more emotional edge from the leads might have let the album really take off.

Emotional edge like we hear from Micah Christian. I wouldn't pick a tenor to cover India Arie, but Christian gives me goosebumps with his plaintive heartbreak and creative riffs on Ready For Love. I also liked his surprisingly melancholy take on Solsbury Hill, although the arrangement lets him down. The song tries to break out by the last chorus, an anthemic answer to Still Haven't Found What I'm Looking For, but never quite gets there. Much like this head-scratcher of an album, which is better sung than the majority of male collegiate work but ultimately with feet of clay, solidly on the ground.

Here's the rub of being a RARB reviewer, you fall in love with certain aspects of a recording and you're supposed to talk rationally about those elements for all of the world to read on the internet. It's a very difficult assignment, but I love it. Except when I feel like I'm a tangled mess of ideas about an album, like the latest by the boys of summer — The Hyannis Sound.

Shirt, Tie, Khaki by all means is a really good album. There are a few exceptional songs on the album, some really good songs and a couple of just slightly above average tunes. The group has taken the production values and creativity established on Route 6 and continued the journey toward superstardom. Yet, that's the problem. Route 6 was a groundbreaking work of art. The guys shed their summer frat boy veneer and became a powerhouse of intoxicating musicians. Could they rise above the bar that they've set so high?

The answer is no. But they've maintained a great course, so they really don't have to. The opening track Get Set sets a great tone for the rest of the album. Upbeat and poppy with an amazingly effective introduction, the song is full of energy and verve, calling to mind the breakout song for Virginia Tech Juxtaposition from 2001, but surpassing that one in every way. Matthew Labak's solo has the right drive that sets the benchmark for what a great soloist should sound like.

Andrew Delong continues the good vibes with the infectious Marc Broussard cover Rocksteady. These two songs are such a one-two punch of greatness that you want to crown them the Kings of A Cappella. But then reality sets in and the guys fall back to Earth from that too high pedestal by unleashing Lady Madonna on the world. I'm sure this track works in the summer repertoire. I can imagine sitting out on the cape and enjoying an afternoon serenade, but its inclusion on this particular album is jarring at best. The Ben Folds Gone (Man, why aren't more people doing The House Jacks song instead?) is similar in style to Lady Madonna but fairs a bit better in the recording.

The remaining tracks on the album continue a sort of kiddie roller coaster ... casually coasting along a boring yet enjoyable ride — utterly safe, but worth the three tickets that you paid to get on it at the fair. That is, until the most heavenly version of Ready For Love lifts the love train off of its tracks and shoots for the atmosphere. Micah Christian is brilliant. There I said it. Soulful, charismatic, commanding, tender, emotional, he caresses with the voice and leaves the listener spent. And he does it again with the closing track Solsbury Hill. I really don't know how he does it, but I'm so glad he does.

If you've been a long-time fan of the group, getting Shirt, Tie, Khaki will fit nicely in your rotation. For those of you just getting into The Hyannis Sound, the album is a primer in making solid a cappella recording while having a great time doing so. Its crisp sound, good arrangements and outstanding singing is sure to give you some aural pleasure.

Elated voices will harmonize with Andy DeLong's exciting pipes as Rocksteady transitions into a cappella's most infectious chorus. Bodies will sway and bounce to Chariot among thick soaring tenors and a deep beat that pounds happiness into your skin. Nerves will calm while transported to Carolina in My Mind, where particularly thoughtful "can-you-see?" arranging turns a simple back-roads tune into an extra sweet offering. So yes, we'll always say nice things about Paul. And we'll all empathetically say, "I wish I knew, Joey." when he desperately sings, "Oh simple thing, where have you gone?". And listeners will rally to really Change The World after the vocally outstanding and emotionally committed number rolls by like a gospel high. An entire album full of flawless, memorable perfection? For fans of Hyannis Sound, this accomplishment must seem Easy.

Incredible voices, unmatchable energy and top-notch arrangements warrant a fast purchase of this album. I'm even extending a friendly hand of congratulations to John Clark, whose last Hyannis Sound effort made me frustrated, and now (along with the work of co-mixers Ed Boyer and Tim Bongiovanni) makes me delighted. But a review of Shirt, Tie, Khaki just wouldn't be right without praise and admiration for Micah Christian, the vocal soul of this album. His performance on Ready For Love is one of the best solos ever recorded, a cappella or other. And after his passionate delivery on Solsbury Hill, it's clear that Micah's golden touch will take him far in life, a life that could certainly be full of packed venue halls and devoted fans worldwide. Since Micah's Hyannis Sound tenure is over, let's hope we keep hearing more (and more, and more, and more!) from this unforgettable man.

Shirt, Tie, Khaki should be celebrated as one of the finest a cappella albums ever made, and Hyannis Sound should receive a nationwide standing ovation for bringing it to us.