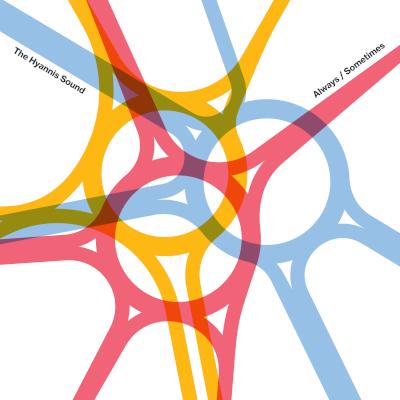 The only surprise from The Hyannis Sound on the group's new album Always / Sometimes is how ridiculously consistent these guys are: from song to song and from album to album, the group crafts enjoyable performances of familiar hits. It's hard to believe that the lineup changes from album to album and from summer to summer; these singers sound as though they sing together every day of every year.

Always / Sometimes is typical Hyannis Sound: aca faves (And So It Goes, Bridge Over Troubled Water), classic artists (The Police, Frank Sinatra x2, Whitney Houston x2), and a few contemporary(ish) pop artists (Sara Bareilles, Lake Street Dive). Predictability isn't a bad thing for this group, though: the group knows its audience and knows what repertoire will work. The group also arranges impeccably, from the sparse moments on Kiss from a Rose and Gravity, to the lush, joyous moments on How Will I Know. The watercolor, cascading intro to Bridge Over Troubled Water gives a fresh opening to a song that's been done a million times, and there's so much joy and fun bottled in Every Little Thing She Does Is Magic. Album-closing Celebrate! Medley is just all-around fun and switches seamlessly from one tune (and key!) to another.

One thing about Always / Sometimes (and The Sound's repertoire in general) is that many of these songs have the final crescendo and gusto of an album-closing song (Like a Prayer, It's All Coming Back to Me Now, and My Way in particular). These big, grandiose moments probably go over really well in concert, but they make the album seem a bit disjointed; many songs feel like they're signalling the end of the album, and then there's more music to come. One other weird note about pacing: You Go Down Smooth feels super-duper fast. Soloist Ben Vance sounds phenomenal on all the vocal runs, but the group feels like it's speeding.

Always / Sometimes is a solid addition to The Hyannis Sound's legacy: excellent arrangements, beautiful voices and delivery, and an overall enjoyable listen. We expect nothing less of this group of singers who are accomplished in their own rights — but that doesn't make it any less impressive when the group delivers an album that's this consistent throughout and in the context of its overall discography.

Some things in life aren't fair. The Hyannis Sound, being this talented, is one of them. I've been anxiously awaiting this release since I heard the group's last album, Boys of Summer. This album features many of the same earmarks of past iterations of the group, including unbounded energy, amazing soloists, and absolutely breathtaking musical moments. However, when all is said and done, it almost feels like the group went too big, creating an album that is great in chunks but a bit too much for a listener to stomach in one sitting.

Let's start with the obvious positive about this album. When it comes to absolutely unbounded energy that leaves a listener smiling, there may not be a group in the world better than these men in Cape Cod. Start at the top of this album and it's easy to see why. Freedom! '90 and How Will I Know offer different kinds of infectious energy. Freedom! '90 is a welcome addition to the group's recorded works due to it being so different than a large majority of other tracks over the years. So many Hyannis Sound songs are at breakneck tempos that refuse to relent until the last chord; this song instead has a laid back groove which lets the group really explore a different element to its sound. The bass (whose name is unfortunately not directly listed on this track) deserves an MVP award. He has such a well-executed backbeat groove for a lot of this song and it sells the track exceptionally well. How Will I Know steps closer back to the sound we know and love, and soloist Peter Carboni is an amazing frontman and proves it from the first (exceptionally high) note until the final note. This sound is the reason I anxiously await every single Hyannis Sound album — it's infectious fun that plays to the group's strengths exceptionally well.

Fast forward to I Have Nothing, and we have another reason why The Hyannis Sound is one of the best groups around. The story this track tells is executed to absolute perfection. Anthony Rodriguez might be inhuman — his voice is so perfectly clear in the upper register. When most men's groups perform a song such as this, either the key is changed to better suit the soloist or the song is more closely kept in a higher register as a point of parody. This track stays in the original key, and Rodriguez delivers a breathtaking performance. Jared Graveley also deserves an award as the arranger of this track. He sets up the backgrounds both to support the soloist while still remaining interesting, and also to share some of the spotlight with the soloist. The cascading waterfall of notes on the line "stay in my life" at about the 4-minute mark is one of my favorite arranging moments of the year. It adds suspense while still keeping the story arc of this song.

However, while listening to Always / Sometimes, I asked a question I've never asked while listening to a Hyannis Sound album: "Wait, why is there more?". This album is fourteen songs long, accounting for over an hour of music. This usually isn't an issue, as I will happily listen to this group's music, but, when And So It Goes and My Way are both classic "end the album here" songs, every song after feels like the group is faking out the listener by saying "actually, we've got another song or two". And as a listener, I was tired by the end of this album, no matter how good the material is. Furthermore, two songs, Like a Prayer and It's All Coming Back to Me Now, are incredibly theatrical in nature. I don't mind the theatrics, but these tracks might be better added as an addition to the end of the album, and possibly just one of them. These songs are huge stories told in the middle of an album filled with so much energy. By the end, it feels like the group finally went too big and it leaves me mentally tired.

Always / Sometimes leaves a somewhat odd taste in my mouth. There's nothing inherently wrong with any one track on this album. It's all great music to listen to and it's performed by a cast of absolutely stellar musicians. However, upon relistening to the album, I found myself reaching for the skip button and just skipping to my favorite tracks rather than waiting for them to come up in a few minutes. This release features great soloists over the top of great arrangements, but the album is just so heavily dramatic that I will skip a great story because there's going to be another story two tracks later. Give it a listen and see which stories you want to hear again.

If anyone is looking for a top-notch all-male a cappella album, Hyannis Sound serves us a hot and fresh one with Always / Sometimes — mostly always. These guys are unstoppable when it comes to bringing new flavors to songs we have heard many times before. Just when you felt like you've already heard the best version of a particular song, Hyannis Sound makes it sound fresher and more lovable than ever. The group's musical choices on its arrangements are almost always goosebump-inducing, paired with vocalists that can bring joyful tears, make you wanna dance, and/or make you question why your tears are falling down your cheeks. This album is proof that Hyannis Sound doesn't settle for what's good from its previous releases; this group always has something up its sleeves.

So let's talk about the songs individually. Though there are a lot of great elements that words cannot describe, I'm going to try. If you want to start an album with fireworks, Freedom! '90 is the way to go. The gospel intro calls for attention and I'm hooked from the first note to the last chord. It doesn't end there. The next song is the Whitney Houston classic, How Will I Know, and I don't think any other group can match or supersede this version. The African rhythmic texture gives it an innovative feel and it lingered in my brain even after listening to the next few tracks. Moving on, Jason Berk's solo performance on Gravity is all I need to hear to make me feel vulnerable as it reminds me of my first heartbreak. Next up, we have another classic, this time from Madonna. Peter Carboni slays his solo lines on Like a Prayer while the guys back him up with a solid gospel choir sound.

In the choral (and "almost choral") category, Hyannis Sound shows how it can just sing with minimal vocal percussion backing the group up and still sound very good. The soloists are always spot on in their frontman role and this is shown by Jared Graveley on his rendition of My Way. There is one way musicians could mess up singing Bridge Over Troubled Water or And So It Goes and that's oversinging them. However, Hyannis Sound covers both so impeccably, making them stand alone without trying to show off vocal acrobatics — both are simple but really heartfelt. I Have Nothing in its original key sung by a male is ambitious, and insane; thank goodness Anthony Rodriguez sings it unbelievably with ease. Next, Kiss from a Rose doesn't come with the usual "ba ya ya ba daht da da da dah" intro. Mark Farnum's arrangement starts with minimal background vocal movement, giving focus to Grayson Kilgo's killer delivery of the song's lyrics — I love it.

The group shows that it can sing other music genres with You Make Me Feel So Young and You Go Down Smooth. My least favorite track, It's All Coming Back to Me Now, sounds more like Broadway and I'm not sure if that's the intended effect. But by wrapping up the album with Every Little Thing She Does Is Magic and Celebrate! Medley, these guys are unstoppable.

If you haven't heard of The Hyannis Sound, Always / Sometimes will make you a fan instantly.