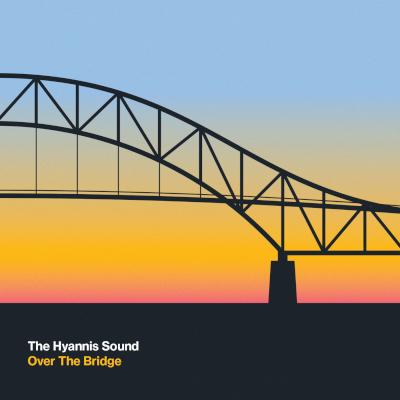 Hyannis Sound is a collegiate supergroup. Male aca-hopefuls audition for a summer of gigging, recording, and what-happens-in-Hyannis-stays-in-Hyannis fun. Over The Bridge represents the men of the 2011-2012 "class". And it's freakin' awesome.

Heroic, soulful, staff-crushing tenors destroy lead after lead, breathing new life into '70s classics and modern tunes alike. The men also boast basses Joe Whitney and Marc Whittington. One or both of them are mutants, adding just the profundo that makes ladies sit near the subwoofers. And every part in-between is balls-to-the-wall power meets perfect shaken-not-stirred, cocktail blend.

If the voices weren't enough, Noah Berg's arrangements of Call Me Maybe/What Makes You Beautiful and Somebody That I Used to Know, and Ed Boyer's arrangement of Choices are some of this year's best. Brilliant, bold and beautiful, they deliver enough of the original to please wide-eyed audiences, and yet enough reimagining to delight and reinvigorate even the most jaded aca-fans. These arrangers are standouts, but they enjoy spectacular company; almost all this album's arrangements are excellent.

Ed Boyer has his nimble, little hands in production, mixing, editing and tracking, and along with a team of others who worked on these elements, he creates first-rate work. There are plenty of effects, but all serve the music. All drive the emotional arcs. None defeat the sense of listening to an a cappella recording. Adding Dio on mastering is the cherry on top.

Of their last recording, this reviewer complimented the singers' talents, but gently bemoaned the album's overall predictability. Hyannis Sound has that problem licked on Over The Bridge. With killer singing, delicious production, brilliant arranging, even great credits, this is easily one of the year's best recordings.

In my review of Hyannis Sound's 2011 album High Tide, my biggest complaint was that the album felt too safe and took no risks.  The group's latest album, Over The Bridge, is another impeccably-sung album full of contemporary and classic pop songs, but this time, the guys have — oh boy! — a few tricks up their sleeves.

First and most notably, there's an original song on here, Ozymandias, which is catchy, tender, and beautifully arranged, thanks to Berklee's Mike Hubbard who takes on triple duty here (songwriter, arranger, and soloist). Second, while the group does have plenty of predictably safe songs in its repertoire, there are also a few hidden gems here as well — special mention to the stunning Choices (originally by Jarle Bernhoft, with a spectacular solo by Kevin Pidgeon and a compelling arrangement by Ed Boyer). Always On My Mind sounds beautiful here; the group still knows how to deliver a tender ballad with extended chords and a slow-growing build, and soloist Colin Egan's honeyed voice certainly doesn't hurt either!

Third (and arguably most importantly, for the group's clientele and performance schedule), the guys find a way to make even the predictable sound fresh. The overplayed Call Me Maybe and What Makes You Beautiful are combined into a medley (kudos to Noah Berg for melding these songs more interestingly than a simple A+B), and commonly-covered artists like Adele and Michael Jackson are represented with less-commonly covered tunes (Turning Tables and Rock With You, respectively). There are a few overdone songs here, sure (Somebody That I Used to Know and Carry On Wayward Son), but the arrangements have a few moments that aren't simple transcriptions (on the former, especially), which keeps even the most overplayed songs/artists interesting. The arrangement for Little Lion Man is gorgeous (credit to Hyannis alum Brian O'Shaughnessy), and actually, while we're talking about arrangements, Jim Hogan's take on Turning Tables has haunting momentum.

There are still a few jazz-hand easy-listening moments (Canned Heat for one), but overall this album is a more interesting listen overall than High Tide. The group still has its impeccable attention to detail in terms of pitch, arranging, soloists, delivery, and liner notes (writers and original artists are credited here again!), but the guys have taken a few more risks this time, making Over The Bridge a great album for listeners beyond the group's Cape Cod clientele.

In each of the major professional American sports, there is a yearly tradition where the "best" players are voted or selected to participate in an All Star Game. As a kid, I loved the baseball and basketball events because I could watch the signature players of the era do the things which made them precisely that. Hyannis Sound is, and has been for quite some time, the "All Star" team of male collegiate a cappella singers (and recent alum), often from the East Coast. With Over The Bridge, they once again show why they are the signature group for male collegiate (sort of) a cappella, but they also hover around the reason why I don't care about professional All Star Games as much anymore: there's something missing.

Let's back up for one moment, and point out that, as always, Hyannis Sound has crafted an album with consistently excellent solos, solid arrangements, and top-notch production (from an all star collection of sound alum including Tim Bongiovanni, Alfredo Austin, Jeff Eames, Colin Egan, and most notably Ed Boyer). As I have generally found to be true, this is pretty much the shiniest, brightest of what college a cappella has to offer. In other words, it's a mix of covers from the past four decades, performed very well, and it passes the ear test and the easy listenability test with flying colors. Several arrangements, paired with completely appropriate production choices, combine to form some of the best tracks I've heard all year.

Choices has a terrifically chunky, chewy guitar texture and the always impressive Kevin Pidgeon on the solo. Somebody That I Used to Know, a song which is rapidly approaching its expiration in the a cappella community, is nevertheless unique for its sinister tone and repressed rage bubbling beneath and just up to the surface. I Won't Give Up is lush, with gorgeous, nuanced mixing by Mr. Boyer. There's the typical array of cutting edge guitar (Peace of Mind) and keyboard (Carry On Wayward Son) solos, and everything sounds really good here.

What's missing, exactly? I suppose it depends on your perspective. The reason I eventually got bored with the All Star Games was that I realized the athletes didn't take it seriously; they were coasting on talent and enjoying themselves without investing themselves in the outcome, and that ruined the magic just a bit for me. I can't say Hyannis Sound is really coasting here, because they obviously worked hard to put this album together. The problem is that it doesn't feel like there's any real degree of difficulty, considering it is Hyannis Sound making the music here. This group is, as with past iterations, comprised of some of the most talented arrangers, soloists, and producers in college a cappella today. It may be unfair, but that carries with it certain expectations. Just as the Beelzebubs are forever tasked with being trendsetters because of their consistently high output over the years, Hyannis Sound creates similar expectations. In that regard, and really only that regard, there's just a little something missing from this album for me. Maybe it's unfair, but that's what comes with being an All Star.

For most people, including most critics, this album is going to be just fine. In fact, it'll be better than fine — it will be one of the best collegiate-style albums of the year. It's got some of those moments you look for when you watch the NBA (Lebron pulling off some spectacularly athletic dunk) or MLB (Miguel Cabrera hitting a clutch home run) events, and it's very entertaining. There's just a hint of unrealized promise lying under the surface — more original songs, more unique arrangements, I don't know exactly what it is, but I know that they're very, very close to making the best album their instrumentation has to offer. For now, though, I'll pull those highlights together, sit back, and enjoy the spectacle for what it is.