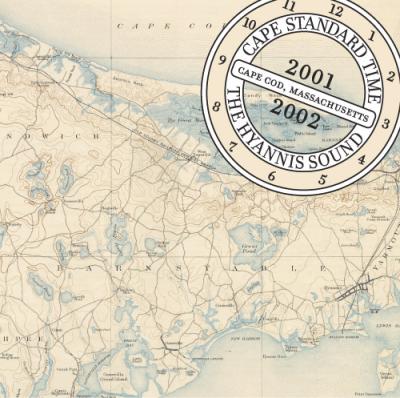 Hyannis Sound has done it to me again. When I reviewed their previous album, 110, I was alternately in love and out again because the songs fell into two categories: studio (in love) and live (no love). With Cape Standard Time, they have changed that slightly. I now have some love for a few of the live tracks. The line between the studio/non-studio is still pretty clear. As I was informed on the RARB discussion board, Hyannis Sound's next release will be all-studio. I can hardly wait to lay my greedy ears on that album.

Cape Standard Time gives me enough to enjoy. 72 Hour Daze is phenomenal. I get to love Greg Binstock of The Bubs' Code Red on Vanessa Carleton's A Thousand Miles. I never really liked the song until I heard his dulcet voice belting it out. I adore their version of (Sitting On) The Dock of the Bay). If any group could do Bohemian Rhapsody justice, Hyannis Sound is it. This album that puts a smile on my face.

Hyannis Sound is an all-star group with all-star everything: arrangements, soloists, vocal percussion, blend, pitch, etc. They have everything going for them.

The live tracks still leave a lot to be desired. L-Y, the adverb song, must be truly entertaining live. On the album it leaves me wanting to see the crazy things the guys must be doing on stage to get the audience to laugh so much. On Your Smiling Face, the soloist (fellow RARB-er Mark Manley) clearly has a good voice. But his solo lacks the ease and grace of most of the other soloists — a studio and a few more takes could have fixed that. On On and On, the trio is horribly out of tune and blend, as are chords in Fly Me to the Moon and Parting Blessing.

Sailing and Fields of Gold were the only live tracks that impressed me.

But of course you need to own this album. Take this and 110 and burn your own CD of the studio tracks until their next, all-studio release.

Having enjoyed 110, I was excited to hear Cape Standard Time, the latest release from The Hyannis Sound, Cape Cod's summertime group made up of men currently or previously singing in various groups around the country. Sadly, although the disc is solid and probably technically better than 110, it still disappointed me. The disparity between studio and live tracks that tainted 110 is still present here, but it is not as frustrating as the change in sound and direction of the studio tracks themselves.

The studio tracks on 110 had a powerful lushness to them. On Cape Standard Time, however, a thinness permeates the production. The backgrounds sound high and tinny, and the production often goes overboard aiming for a poppy sound that doesn't always fit the song choice. I have rarely felt so conflicted about a song as I do about Dock of the Bay. The arrangement and performance are stellar, but the group loses any sense of relaxation from this Otis Redding classic and leaves me envisioning a boy band dancing on a pier in a soda commercial. The production on I Feel Good goes way too far with pitch shifting on the solo line and scratching and so on. And Bohemian Rhapsody disappoints without production concerns, due to the occasionally flaccid performance of a song that demands power and sharpness.

The group does, however, turn in some rather impressive studio work. Vanessa Carlton's A Thousand Miles is a clear standout with a great arrangement (one of seven by Samrat Chakrabarti on the disc) and a showstopping performance by that gem from The Bubs, Greg Binstock. And while the group maybe shouldn't tackle Queen (I've only heard one group that successfully has), they do a stellar job with another killer song with Thriller. Walking Away works very well for the production style of this album and features a great solo by Roopak Ahuja. Jeff Buckley's Last Goodbye has some odder harmonies, but the group pulls it off with confidence, great dynamics, high energy, and a passionate lead from Darrell Belch.

And then there are the live tracks. These consistently feature rough intros, a problem evident on 110 as well. The group also has tuning issues throughout many of the live tracks. On and On and Sailing have some real nice musicality from the block and leads, but the tuning brings the songs down. L-Y should have been left off the album, as the performance is sloppy and the attempted humor translates to disc about as well as a mime performance, although perhaps more annoyingly, since mimes don't have tuning problems. Fly Me to the Moon and Parting Blessing are the two most successful live tracks, as they show off the group's blend, style, and musicality without being brought down by loose tuning and tempos.

This disc, like its predecessor, is worth a listen despite its weak points. Samrat's arrangements still dazzle. The percussion is always artfully produced, the soloists are good, and the whole group is clearly quite talented and energetic. But for their next release, I'd like to hear them bring back some of the lushness, and even consider turning out separate live and studio discs. A two CD set? I'd want to check it out.

Cape Standard Time features solid singing, effective tuning, and a wide variety of cover tunes. But I admit to expecting more from what amounts to a group of collegiate all-stars.

Interspersed live and studio tracks create jarring transitions and contribute to a lack of continuity for the project as a whole. It makes me long for the good old days of vinyl records which would have allowed for an A side of live tracks and a B side of studio tracks.

I enjoyed the live tracks far more than the polished, produced, slick studio work. The live tracks breathe and have real life. They benefit from a more fluid feel and offer more humanity in the sound than do the sterile, perfected, studio cuts. Live percussion, as usual, just can't compete with the ultra-tweaked, sequenced, studio variety. But this makes the live recordings no less enjoyable. The charm of The Hyannis Sound comes through in the live format.

Two specific problems irritate me. 1) Auto-tuning on I Feel Good and Thriller, whether used for correction or as an effect, is distracting and detracts more than it contributes. 2) The left-to-right-to-left-to-right wave-like panning of the solo on Sailing makes me a bit woozy and seasick.

Groove, pocket, and rhythmic integrity are also lacking where they're needed most. Primarily studio tracks, but also live efforts, fall into the same straightforward, square, rock-n-roll beat. This works fine for the rock songs. But it doesn't do justice to the jazz standard Fly Me to the Moon, the rhythm-and-blues inspired (Sitting On) The Dock of the Bay, the Godfather of Soul's hit I Feel Good, or Sting's lilting Fields of Gold. The arrangements don't come across as an attempt to mold these classics into a rock-based sound either. Some musical genres and styles just can't be performed effectively without more flexibility in what amounts to the rhythm section.

On the first listen, I found the album enjoyable enough. But ultimately there just isn't enough there to make me come back for more.