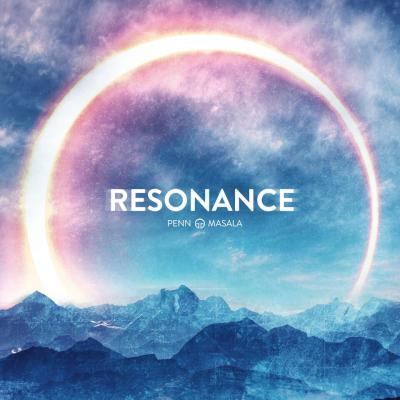 If you have heard anything from Penn Masala in the past fifteen years then you know what to expect from Resonance. So little has changed, in fact, that most of my sentiments about this album have already been expressed in a number of our previous Penn Masala reviews. In sum, the English/Hindi mashup trope needs to be rethought, the arrangements are heavy and meandering, and the passion the singers have for their music does not always come across on their recordings. That's Penn Masala. Here are some of the particulars you get with Resonance.

This album is all about Bollywood. I'm sure there is much more to the musical culture of Southeast Asia, but ten of the eleven standard (non-bonus) tracks include a song originally composed for a film. The one exception is Reflection (In Your Eyes), an upbeat original by group member Dilip Rajan. Manwa Laage (Feat. Jonita Gandhi) and Yun Hi Chala Chal are pure Hindi, and the remaining eight are longwinded mashups that blend Bollywood with American and British pop.

The lead vocals are just another layer in the multilingual web of harmonies and rhythms. The ten soloists featured across the album are all competent, yet only a few performances stand out. Jonita Gandhi grabs your attention on Manwa Laage because she is the only female voice on an otherwise all-male recording. Gandhi, a YouTube sensation and up-and-coming Bollywood star, has a perfect, graceful delivery for instilling sincerity to the romantic duet. Prashant Ramesh and Akiff Premjee leave a similar impression of sincerity on Tum Hi Ho / Mad World. The leads have their moments on other songs but generally sound like they lose interest around the first chorus.

Physical copies of Resonance come with two bonus tracks: Evolution of Bollywood Music and The Bollywood Breakdown. At the time of writing, both are posted on YouTube but are excluded from digital downloads and online streaming services. These two medleys offer as much entertainment value as the other eleven songs combined, so bite the bullet and get your hands on a CD.

Evolution of Bollywood Music takes us from the quaint Hindi melodies of the 1940s up through the shameless exuberance of today's Bollywood hits. This medley features a whopping 39 songs seamlessly strung together into an amusing, educational extravaganza. Meanwhile, The Bollywood Breakdown celebrates a more modern feel with 19 college favorites. It is skewed toward American artists, but it wouldn't be Penn Masala without a few splashes of Southeast Asian flair. My only complaint is that the album artwork does not credit the arrangers, soloists, or original composers for all the work that went into these two pieces.

Penn Masala is a technically sound group of musicians with a noble goal of bringing together music from around the world. There is nothing wrong with an album of mash-ups ... as long as the transitions and the overlays are arranged with purpose. Maybe there is something more profound than chord changes that connect the English and Hindi songs on Resonance, but without articulate musical cues, that synergy is lost on me.

Penn Masala gives us a great list of to-dos for a fantasic fusion album. The front half of Resonance is superb, with some of the most original re-imagined arrangments, flawless integration of traditional music, and energetic solos I've ever come across. I want to give a special note to two songs: the opener Main Rang Sharbaton Ka / Sunday Morning and the mid-album original Reflection (In Your Eyes). I've heard countless covers of Sunday Morning throughout the years, and no arrangement has ever brought freshness back to it, until now. The grinding chords lead listeners through a chromatic descent, giving us something new to find each listen. The transitions between the two songs woven in is sublime, never feeling forced and always leading our ears exactly where they need to be. In Reflection, the composition is only part of the success; its victory comes in the background energy and the soloist. The pulsing nature of the syllables is complemented by the constant drive of the tempo, giving it a distinctly older rock attitude. The soloist, in contrast, doesn't shout or blast out; he is cool, edgy, and controlled, and glides through with suave grace. Call me impressed, boys.

I'd also like to call attention to the percussion — a lot of it is voiced, giving the impression of different instruments than your standard drum kit without diving into the almost mechanical dubstep of today. If anything, I'm taken back to the early days of a cappella percussion, and I love it. It's the perfect lining on these tracks to make me feel like I'm listening to real, live people who love singing. That being said, crediting is certainly lacking, and I would have liked to put names to some of these sounds.

The back half is scored "average" only because the tracks we get aren't quite as unique or attention grabbing. They certainly aren't bad, but they definitively lack that stand apart composition and personal enjoyment factor. Once we hit track seven, that effortless transitioning that defines the first six becomes more forced and clunky, distracting from the performance itself. The bonus Bollywood breakdown tracks are nice but not really necessary. I'm a sucker for the inclusion of Bottoms Up in anything though (among other things), so I definitely dig the album closer more than the first medley.

Being a hair above, yet far from perfect, makes Resonance an entertaining ride.

If you've ever listened to fusion a cappella, there's a good chance you've listened to Penn Masala. The boys from the University of Pennsylvania are well known for their Hindi-infused music, and their abilities have resulted in appearances on multple BOCA albums and even a cameo on Pitch Perfect 2. This success has solidified their reputation as quite possibly the best in collegiate fusion a cappella. With Resonance, I expected much of the same brilliance I have come to know them for. However, as I listened to this album, I began to slowly pull back the curtain on what makes Penn Masala so good, and it started ruining the magic for me. Resonance is a collection of simple arrangements that let the strength of each soloist shine, but the album lacks a sense of innovation to keep interest for a long period of time.

Each soloist gives a great presentation. Whether it's Praveen Rajaguru performing Main Rang Sharbaton Ka / Sunday Morning, Akiff Premjee in Tum Hi Ho / Mad World, or Hari Ravi in Can't Feel My Face / Rehna Tu, the solos are driving the stories of each of these songs. The emotions are palpable, and I want to believe every second of their stories. There are also the Hindi verses to consider — in each song, there are numerous vocal acrobatics being done that I would sell my soul for the ability to do. Each of these performers sings at a level that is very hard to reach — and does so gracefully. I'm a huge fan.

However, after looking past the soloists, the songs change. For the tracks to flow as seamlessly between English and Hindi as they do, the backgrounds are often very simple. There's a good number of block chords. These block chords suck the energy from the songs. It's almost hard to know the original songs first, as most songs that have a Western origin seem to approach a more moderate tempo to accomodate the Hindi song that is infused within that track, and this moderate tempo does no favors for the originals. After a while, many of the songs begin to sound the same, and this musical sense of deja vu can be problematic. It's a dangerous road to be on, and it looks to be one that Penn Masala needs to get off of sooner rather than later.

It poses a question for many of the numbers on this album: was the fusion done because of a natural musical progression, or because it is a requirement of any song Penn Masala produces? If the fusion is a requirement, this choice seems to be holding back Penn Masala, preventing the group from making sincere musical progress, and instead giving a presentation that is very similar to the same product that was released on previous albums. There are exceptions, of course, but the majority of the album is not groundbreaking. While Penn Masala proves that they have the soloists to impress audiences, these singers need to work on innovating their arrangements before their recordings reach the same notoriety that the group possesses.