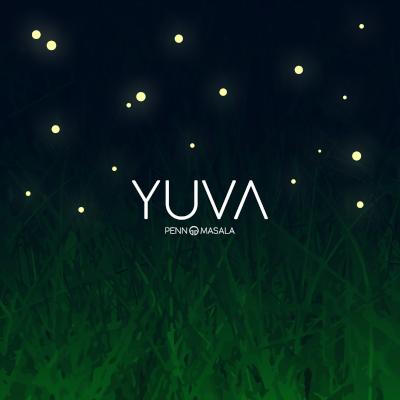 I do love reviewing fusion groups like Penn Masala. I really enjoy getting exposed to new music and new artists, digging into the lyrics and themes for mashups, and it's a nice break from hearing the umpteenth lift of whichever current-chart-topping-pop-song is hot right now. So with all that in mind, I am a little disappointed that Yuva didn't impress me more as an album.

I want to start with some of the things that Penn Masala does right here, before hitting the areas where the group could improve. For one thing, all of these young men can sing. It's a little hard to pick out individual soloists sometimes, since so many songs feature a number of different leads, but they all have really great tones, excellent runs, and provide great performances of their respective solos. I also really enjoy some of the different sounds that they use across the album, bringing some new, fun textures to their tracks. Whistling, raindrop sounds, and fun guttural tom-like vocal percussion sounds really expand the sonic space and bring a different feel to Yuva than what might be considered "standard a cappella fare" these days.

That being said, I'm a little disappointed that the group didn't capitalize on the opportunity that these voices and sounds offer. Penn Masala feels like a group that should be able to deliver a really spectacular album but is let down largely by the arrangements, and to some extent by the direction. Most of these tracks are pretty heavy on simple background block chords through entire songs, which don't really give the backs much to do or much room to play or bring energy and emotion to a song. When that's the case, you'd think the group would at least take advantage of dynamics to help an arrangement breathe, and yet there are almost no dynamics found in the entire album. It ends up leaving the listener with little variation and few moments to really latch onto.

There are some songs that stand out from the rest, including the original Ishaara, written by group members Prashant Ramesh and Chetan Khanna. It's a fun new track that would be easily accessible to listeners who aren't native Hindi speakers or Bollywood afficionados. Some of the regular fusion tracks also stand out to me more, including the mashup of Ed Sheeran's Photograph with two Bollywood songs: Aayat and Laal Ishq. Thematically the songs link up nicely, and the arrangement does a nice job of using elements from each to highlight the sections of the others.

I think Penn Masala has a lot of opportunity to use an album like Yuva to identify the elements of its more succesful tracks and improve on the weaker ones. This might mean having fewer songs on future albums (I imagine block chords make for easier and faster arrangements). Yuva has some excellent foundations and a lot of room to grow. I'd love to see what this group could deliver with a little more intention and polish.

With my review copy of Yuva, the men of Penn Masala included a letter. In this letter, the main point was this: "[W]e have made the decision not to provide translations for the Hindi sections . . . we feel that the literal translation of the Hindi words is only a small part of the entire musical experience, and a translation often does not do justice to the full meaning and emotions of the song." I fully agree with that thought process. Music is a universal language, and sometimes I feel like I get distracted by lyrics and forget the rest of what I'm listening to. However, in my review of the group's last album, Resonance, I stated that the use of fusion throughout the album was more problematic than beneficial. Often, the arrangements had to be simplified to be able to accommodate both the English and Hindi languages. I was very much hoping that progress was made to be more innovative and use the fusion as an inspiration and not a requirement. However, while it looks like progress has been made and there are flecks of brilliance within the album, a lack of innovation across the board lowers the overall value of Yuva.

The first track sets a lot of the tone for an album. One Thing / Jeena Jeena sets a weak tone as an opener for Yuva. Throughout the album, the group shows that its individual voices are very good. However, the backgrounds on the opening number create a terrible landscape for these voices to shine. For most of the song, the backgrounds are simple chords moving through a constant progression on simple vowels and patterns. When the Hindi verse arrives, there is very little change in background — the background progressions don't change much, if at all. The overall energy doesn't even change from chorus to bridge to climax. This song just feels incredibly flat, regardless of the language. This speaks to my original point that the fusion should be meaningful, not mandatory. With this opening, the tone is set that there is little effort to use the styles of both Eastern and Western music to the group's advantage.

However, with all that said, there are some tracks that show that success is entirely and beautifully possible. Two tracks in particular stand out. Ishaara is an original number penned by members Prashant Ramesh and Chetan Khanna and Photograph / Aayat / Laal Ishq is arranged by Praveen Rajaguru and Hari Ravi. There is a vast difference between the dynamic range of these two tracks and the opening number. The swells aren't always perfect, but the difference between piano and forte clearly exists. While I think Penn Masala can go further to accentuate the difference, any track that does not show this difference is bound to get boring very quickly. I also want to point out the backgrounds, specifically in Photograph. While both tracks break the mold of simple chords and rhythmic patterns, this track goes one further by using both languages simultaneously. The Hindi sections are sometimes in the background to add extra flavor to the English sections, and the English lyrics "wait for me to come home" are found behind the Hindi verse. This is everything I want in a fusion track. These are the moments that make me stop listening for a second, notice the goosebumps on my arm, and exclaim with delight about the music. It's very easy to find two songs in two different languages and put them together over simple backgrounds. To put them together at the same time to create a product better than either individually is truly noteworthy. I don't need to know either language; I already know I want to listen to this song over and over again.

In closing, I want to bring up the two bonus tracks at the end of Yuva. While they are fun, they showcase everything that Penn Masala should strive never to repeat. The Antakshari Project: Holi is meant to be a game similar to the "riff-off" in the Pitch Perfect movies, where the last word of the previous song lyrics is the start of the next set of song lyrics. Furthermore, all the songs have a similar theme. Desi 4Chord is roughly a play on the Four-Chord Song made famous by the Australian comedy band Axis of Awesome, where every song is a short snippet of a very popular song and meant to highlight that they all follow the same chord changes. To do these songs, Penn Masala opts for simpler backgrounds to allow the soloists to float over the top of the backgrounds and do whatever they need to do. In rapid succession, these songs are fun and meant to highlight the versatility of the group, which is clearly evident. However, due to the simplicity of the songs, once the humor fades after the first few listens, all we are left with is simple chords over simple patterns and words that don't matter over emotions that don't exist. If what we have heard in this album is proof that the men of Penn Masala have really started to hone their craft in letting the fusion element of these tracks speak far more than either original song would individually, then I want to see them do it consistently. Yuva has glimpses of brilliance, and it's about time we see Penn Masala fully shimmering as brightly as it can.

Yuva is Penn Masala's tenth studio album in its twenty-one year history. Penn Masala bills itself as the "World's First South Asian A Cappella Group" and has traveled across the United States and world to promote its music. This group has performed for dignitaries and even made an appearance in Pitch Perfect 2. When it comes to fusion a cappella, Penn Masala is a household name.

Given this backdrop, listeners might expect Yuva to be among elite a cappella albums. But instead Yuva shows that being first and being best do not necessarily go hand in hand. Yuva is a good album, but it could be better — and should be better — given the group's legacy and talent pool.

Yuva collapses under the weight of twelve songs built on block chords. I am exaggerating a bit, but the reliance on block chords is a problem and one that has been mentioned in our reviews in the past. Overusing block chords sucks the energy out of songs and kills them, a pitfall that a group like Penn Masala should be able to avoid. This is especially problematic in audio records because recordings inherently lack the energy and context that (hopefully) come with live performances (which help mask the deficiency).

That said, sometimes block chords are acceptable. Phir Le Aya Dil is the exception on Yuva. The block chords establish a mood and allow the solo to shine. Moving background parts come in at various points to add texture. The percussion is tasteful. And it is the perfect backdrop for a spectacularly-executed solo. Despite my criticism of the album overall, I think this is among the most emotionally compelling songs I've heard all year. While I looked up the lyrics translation, I didn't need to for the message to come across. Again, though, this is the exception.

The album is thematically consistent, which I like. I think Penn Masala, in general, does a good job pairing Hindi songs (Bollywood) with American Top 40 hits. In a few tracks, though, the group could have done a better job integrating the songs to make them true mashups (Sau Aasmaan / If I Lose Myself stands out as an example).

Yuva is pleasant for passive listening. It wraps listeners up in beautiful harmonies and well-executed solos. The album is great for tuning in and out and for having on in the background. It is not great, however, for active listening. Active listening will leave listeners tired and frustrated by the end. The songs become almost indistinguishable and there is not enough variation in dynamics or tempo to hold interest. Also, the energy of the background is often lacking, which is partly a product of the arrangements and block chords.

So, where does this leave us? When all is said and done, Yuva is an average a cappella album. The group has the potential to bring something new and unique to the table as a fusion group (and one of the oldest at that), but Yuva, unfortunately, is not it.