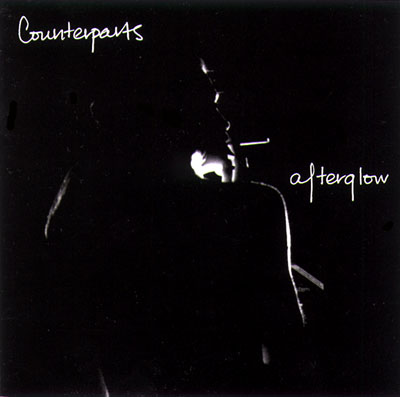 Above average work from UPenn's second most famous coed a cappella group, with flashes of greatness scattered throughout. The Counterparts have found a winning formula with their mix of adult contemporary music and the odd jazz standard.

Everything on this disc would fit in well on a radio station whose motto was "listen while you work". There are few rough edges, intentional or otherwise, and few distractingly good grooves. There are some distractingly good solos (Denise Sandole on Ex-Factor and John R. Stephens, to name two) and one distractingly odd medley, when Fat Boy Slim's Praise You saunters in at the end of Southern Cross. But it's still pretty friendly stuff.

It's not that the Counterparts aren't willing to experiment a little. They break some of the rules, with two Lauryn Hill tracks and a trad-jazz arrangement of the normally sparse and sexy Fever. There's a Madonna track, Last Goodbye, that resolutely refused to differentiate itself no matter how many times I started the CD on that track. And there's a Hooverphonic song, Club Montepulciano, with a soloist who sounds decidedly like modern Madonna. Oh, and I really like their Portishead closer — if there is such a thing as a song that is simultaneously smooth and edgy, that's it.

The tracks I've dubbed average get lower ratings more for their lack of distinction than any major flaws. Likewise, those that really stood out were the songs where the soloist and background came together to take the song to the next level. Somebody's Somebody is arguably the best track on the disc, especially since its melody could come across as so much monotonic prose in the hands of a less skillful practitioner than John Stephens. Ornaments and expression keep the lead out front, and there's a good bit of intensity backing the soloist up.

The Counterparts are a big group, and their sound exploits that instead of trying to focus in on a tighter sound. But compared to the average collegiate group, blur is at a minimum. Amazingly, also, this album does not invite many comparisons to their colleagues Off the Beat. That may be why this album doesn't push the envelope as much as it could — since OTB has long been the first name in alternative a cappella, the Counterparts wisely decided to excel in another direction.

Before you read anything about Afterglow, you should look through the RARB archives and see what people had to say about past albums by the Counterparts. Go ahead and look. I'll wait.


Did you look? Good. I just wanted you to see how in general the Counterparts are fairly well respected. Keep that in mind when I say that Afterglow is easily their best album. I'm basing this on only having heard their three prior CDs, but Afterglow is such a major step forward that I feel confident in saying that their new CD is superlative. Even the weakest of the disc's 17 songs are professionally and confidently performed. On the whole, these are intelligent and passionate performances. The song choices often bravely wander off the beaten path of overdone songs in search of fresh alternative material.

It is a relief to see that the production values of Afterglow are considerably better than on prior outings. On earlier discs the sound was often TOO smooth and solos were getting lost in the overly processed backing vocals. This disc is simpler. The voices sound cleaner and the mix achieves a more intimate sound. The engineering never distracts from the songs.

Another welcome change is that, with the arguable exception of Fever, the Counterparts seem to have abandoned jazz altogether. In the past their pop songs gained a lot from the groups jazzy nature, but strangely the actual jazz standards they sang were often misguided and uninspired. On Afterglow they avoid that pitfall altogether.

You should note that while the über angst-heavy a cappella group Off the Beat (also from Penn) has been gaining a sunnier disposition over the years, the tux-wearing Counterparts have suddenly released the dreariest collection around. That's not bad, but it is surprising. Despite the lively opening cut and songs like I Touch Myself and Can't Take My Eyes Off of You, the overall tone of this disc is almost as consistently downbeat as it is consistently excellent. Don't expect to find the equivalent of a Cosmic Girl or Damn, I Wish I Was Your Lover on this disc. The title Afterglow conjures up a certain blissfully sensation that is very much out of sync with the tone of the album. This isn't an album to play when you want to feel all warm and fuzzy. It's quiet, it's moody, it's smoky. Turn out the lights, unplug the phone, skip to track 16, and surrender yourself to Afterglow.

For a long time now I have really liked the Counterparts. Unlike many collegiate groups they maintain a consistent, personal sound from album to album, a normally superb blend remarkable for its jazz and balance. Too much focus on blend and a corresponding dearth of dynamic has hampered the group on previous albums. With Afterglow, the Counterparts show some signs of change. Without abandoning their practiced, relaxed sound, they successfully branch out into several new areas.

As before, the track selection is varied. (This tendency to variety seems a general trend, what with the normal mine of '80s music almost exhausted.) What is new is that different sorts of songs are now receiving different treatments, mostly appropriate: the 'Parts are learning to back away from their own stamp and let the song speak for itself. Only in some cases does this not quite succeed (e.g. Club Montepulciano, which falls all over itself in a chaotic polyrhythmia). This move is more than a good beginning, generally well-executed throughout.

Soloists are half-and-half. I notice that quite often I write of the ladies seeming more practiced than the gentlemen, and that seems true again here. The lead on Southern Cross, for example, risks washing away into the blend (a shadow of a problem from previous albums), while, by contrast, the female lead on Swim becomes all but mermaidish in her elocution.

Percussion is generally good (even the aforementioned Club avoids collapse); sounds are interesting and nowhere overpowering. The sharing of this duty among several people can sometimes make for drastic changes in quality from track to track.

A good album (a great college album!), showing much development from the group's previous efforts and undoubtedly a fine addition for aficionados everywhere. One question: if this is the afterglow, what must the act itself have been like?

The UPenn Counterparts have upheld a tradition of excellence despite being at a school where you would think the talent pool would be unfairly distributed given the other fine groups they share the campus with. It has been a privilege to listen and attempt to pick apart Housekeeping, High Dive, and now Afterglow. Ever since I laid my ears on the first of that trilogy, I have worried that subsequent recordings would fail to live up to that standard. Yet, I have found the job of reviewing these CDs easier every time, because they set the bar high and reach it with great aplomb.

What's not to appreciate about this CD? The blend and harmonies are tight as a drum, the track selection flows with nary an out of place cover, the soloists (and there are many here) are comfortable with their material, and John R. Stephens is a musical wunderkind (CARA folks, you listening?).

To all other groups struggling with the basics of blend, harmony, and BEAT, buy this CD...use it as a lesson, make it part of the syllabus if necessary. As for the soloists, I haven't sat back and relaxed to such easy listening solos in a long time...each solo performance is as close to breathing as I can imagine. It makes a difference when the singer is not worried about keeping up with the beat.

One warning, and it's something that I almost fell into here...don't take their outstanding production as commonplace, it isn't. The trend runs throughout so many of their tracks that it would be easy to just sit back and let their music wash over you. Remember, this is something to treasure.

Sadly this appears to be the last Counterparts CD for several of its members, John R. Stephens, Gabe Aherne, and Denise Sandole to name a few (unless they can return as grad students) but they leave behind a solid group that can only have risen to their ability and will hopefully continue the journey. This album is a tribute to the excellence that the Counterparts have nurtured.

Nice album! Good selection, creative arrangements, and excellent soloists. Couldn't ask more from a college group. I think the thing that I like the most about this album is the fact that, for the most part, this is how the group would sound live. There's not much done to the voices (even percussion), so all you get is the group. I've heard some recordings of college groups that you think, "There's no way they can do this live." The Counterparts aren't trying to fool you, and yet it's still done well. This kind of musical honesty is refreshing to hear.

I was especially impressed with the soloists. Each one perfectly fit the song they were singing. They also allowed their own personality to show through with their selections. My personal favorites were John R. Stephens on We Can Work It Out and Noraan Sadik on We Don't Have Much Time Together. The best one, though, is Soneela Nankani on Swim. Beautiful! The only solo I had a problem with was Josh Duchan's version of Daddy's All Gone. It sounded like he was trying too hard to be James Taylor and not himself. I wish I had more of an opportunity to hear what he actually sounds like.

The best part about college groups is that you can do any song that you want. No one really gets caught in a rut by only doing a certain type of music. This album is a perfect example. Where else could you find an album with Madonna, Phish, Lauryn Hill, and James Taylor? For the most part, I liked the selection. The only ones that I wouldn't have picked were only because I never really liked the originals, and that's just personal preference.

As with all college albums (and a lot of pro/semi-pro albums) it's not perfect. There are some tuning problems as well as some recording issues, but overall it's a good album. The only thing that really bugged me was the vocal percussion on some of the songs. I can't pinpoint the exact problems, but I think it's the way some of the sounds sound (like a cabbage hitting a wall). Sometimes it seems to be a little behind the song too. It's just a minor thing that, as a VP myself, I pick up on. Not a real big deal.

Counterparts
P.O. Box 30892
Philadelphia, PA 19104
Please specify your address and how many cds you want.
×