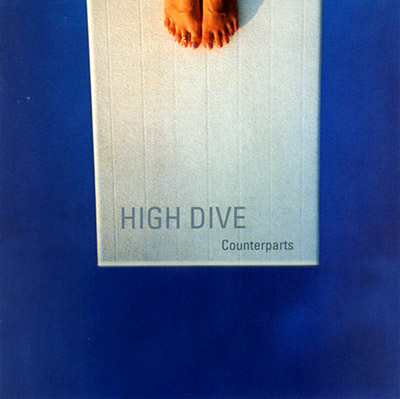 Soft rock lovers, this is your album. The Counterparts have followed up on last year's success with a diverse collection of adult contemporary music with a sprinkling of good old-fashioned jazz tunes. Real old-style jazz tunes, not vocal jazz a la the Manhattan Transfer.

Very nice, very pleasant, will please most people. But when the critic in me comes up for air, she's dying for a wailer.

Since I can count the number of truly barn-burning collegiate tunes I've heard on my fingers, I guess this isn't a significant lack. Sure, I wish the talent out there would direct itself into developing a few songs that really rock, but I can't complain about quality, however it manifests itself. It's a bit unusual when a nice little Christian-sounding number (Love, thy Will be Done via the Artist and Martika) comes as a rocking closer, but that's okay.

This is a quality album. Frighteningly consistent — I could have very easily given it 4s across the board and been accurate. It's got a couple real nice true ballads, a couple of uptunes, some Rick James (All Night Long, one of my favorites) and jazz. I applaud their choice of Cassandra Wilson's difficult Love is Blindness. I really like the way their women have much richer voices than the current thin pop trend. I enjoyed both of John R. Stephens' comeback solos, especially Moanin'. That man has been a gift to all three of the Counterparts' recent albums.

After all the hoopla last year over Housekeeping and its album-leading single, One of Us, the Counterparts realized they had a good thing going. You can hear traces of it all over this album — the intro to Love, Thy Will Be Done, is very, very similar, and so is the transition into Mysterious Ways from that song's intro. But the Counterparts didn't just coast on their laurels. This is a nice effort, and worthy of a little praise of its own.

Once again, the Counterparts have produced an album so smooth the songs are in danger of sliding off the CD. While in the past their polished, jazzy style has been the Counterparts' greatest gift, on High Dive it just might also be their biggest problem.

Although High Dive has high production values and great singing, the final mix has a fatal flaw: it doesn't give the soloists, let alone the backing singers, a chance to break away from the blend. There are exceptions, but by and large, this is an album that needs to learn to let go and scream a little. The soloists, who are all in fine voice, need to stand up and be heard and the arrangements, smart and crisp as always, still need to throw more full blown harmonies at you.

When the group does throw their heart and soul into a song, which happens too rarely on this CD, you are reminded of the groups potential. On Baby, the album's third cut, John R. Stephens delivers the quality solo you'd expect from the guy who made you swoon over One Of Us. But it isn't just John's solo that makes Baby work — suddenly the whole group seems to be singing like it really matters. The Counterparts' crisp, professional sound is enviable throughout this album, but it is all meaningless unless it is coupled with high energy performances.

Most of the songs on this album never work the way Baby does. Love, Thy Will Be Done, with its soulful crescendo, comes closest. Alone has no shortage of energy, but is unfortunately a bit too slow. This makes it sound sluggish despite a suitably wailing performance by the group.

The music on High Dive is a lot like the art on the cover. On the surface, the cover design is one of the best you'll see on a college disc. It' very professional, it has a fresh use of color, and it's remarkably clean. But when you turn the album over, you'll see that the design is shamefully marred by the awkward placement of the bar code. Looking on the inside of the jewel box, the design of the liner notes starts to get a bit clumsy. The type isn't coherent with (or as professional as) the cover art. And the photo selection for the liner notes actually ruins the great effect of the cover art. This is the same problem that the music has: a lot of hard work went into making something stark and beautiful, but that work is undermined by little errors.

One final note: Almost all of the arrangements on High Dive are by Dennis La, who graduated last year. Two are by John R. Stephens, who is graduating this year. Only one arrangement, Hang on to Your Love is by someone who will be in the group next year (Jordan Rockwell, Class of 2000). Is anyone else nervous about the next Counterparts CD?

The Counterpart's last CD, Housekeeping was a wonderful contribution to the collegiate and overall a cappella community. High Dive isn't as much. Overall it's a good CD, but without vocal percussion by Dennis La (see Housekeeping) it loses some of its power. VP in general could've done so much more for the outcome of this project. The recording quality is very brassy, high-heavy, and the women drown out the men on almost every song.

Most of the soloists are strong, doing a wonderful job of keeping their own personal style while trying to match the sounds of the original artist. Their best songs, both for soloists and backup are still their jazzier ones; especially Moanin' and All Night Long. The soloist on Love, Thy Will Be Done: please get him on Broadway; he's got a great, beautiful voice for it.

Tuning needs some MAJOR work. The first song goes out of tune after the very first phrase is repeated. Karma Police sounds like a constant fight to stay in tune, because the soloist tries a little too hard to perform with a sultry feel and keep the pitch centered. If parts were to blend more crisply (i.e.- picking vowels that MATCH) I think tuning would take care of itself. While it doesn't hold true on every song, the altos especially need to work on vowels. I have to get very specific for a moment... they use the syllable "da" quite a bit and it sounds very "east-coast-cheezy-lounge-singer" if you know what I mean; you'd have to hear it to completely understand.

Soloists are much improved from their last CD, but the arrangement quality has gone down a little bit. There really aren't any songs that, after listening to, you will find yourself saying "Wow! That was amazing!" but it's still worth the money. This isn't a fabulous CD, but the Counterparts still hold their reputation as one of the finer co-ed groups in the country. It's a great CD to add to the avid listeners' collection for its unique selection of song choice (minus the Sarah McLachlan tune) and a good effort by the group.

The Counterparts again offer up their very jazzy, highly consistent sound on a brand new range of songs. Part of the appeal of this group lies precisely in their characteristic sound: a lush, smooth quality which lets blend come to the fore and soloists strut their stuff. At the same time, they subsume such a diverse range of music under their capable wing that some songs seem to lose something in the translation. Their muted, jazzy takes on contemporary pop are pleasing ear-candy, but one could wish for more breakout energy on some of the songs; their rock selections in particular might have benefitted from more in-your-face approaches.

But, it is good to go with what you know. By following the fold, the group gets to show off its normally seamless blend. Even when up at forte (although it does sound like only 60% of how loud they could be) there is balance. Some sole parts can sound a bit naked, but the soloists are well-chosen and in general don't try to do too much. The group seems long ago to have taken stock of its limits and does just fine within them.

Still, as mentioned above, there is something to be said for a diversity of interpretation and musicality. Not all songs, one suspects, should sound the same. This is a solid album, but the tracks do blend into one another in a sort of hypnotic fashion. After a few tracks I'm ready to call it quits for a while. In the future, more diverse approaches to different styles of songs could make an album like this more interesting in the long run.

There is something so intrinsically beautiful about a recording that strives to present so many different styles of music from such varied time pieces. When I received this album, I was excited because of my past experience with Housekeeping; yet for the same reason I worried that that would've been such a high that to repeat such success would seem impossible.

The only similarities I can find between this CD and the last are its complete grasp of basic group dynamics and it's thorough excellence from start to finish.

How can I fault a CD that made me recall the Mary Jane Girls with any kind of fondness?

Only fault I could find: why put I Can't Make You Love Me right before the dirge-like Karma Police?

The excellence in the soloists carry through. John R. Stephens shows through on two tracks that should get him some recognition again this year. The other soloists all put together outstanding efforts as well. There just isn't enough space.

I want to save my last remarks for Jordan Rockwell. He only had one arrangement on the album, but the lyricism, even in the background, was just a pleasure to listen to. As Dennis La has graduated from the group, I feel that the future of the Counterparts is well in hand.

To order High Dive or any other Counterparts recording, send $14 plus $2.50 s/h per CD to: