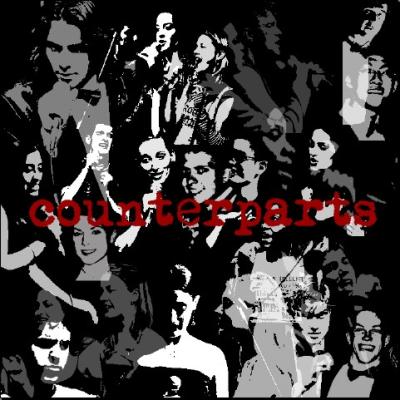 Questionable judgment clouds an otherwise nice new album from the Penn Counterparts. Soloists and song choices are terrific, the tuning is on the weak side and the song order is downright loopy.

Old-school disco, old-school jazz and good old modern rock all have their moments in the sun. But for inexplicable reasons, the disco songs are separated wildly, and the rock songs bracket the jazz instead of clumping together. I love all the variety, but even I find all the back-and-forth jarring. This frustrating nuisance could be avoided easily by grouping the songs in cycles.

Here's another thing: we here at RARB got a pre-release copy, thanks to our willingness to bend the rules a little bit. On the one hand, I think it's great that the Counterparts are organized and trying to get some buzz when the disc comes out. On the other hand — we got an unlabeled CD-R, followed by emailed song credits. The CD-R won't play on either of my aging stereos with real speakers, which means I have to listen to it via my tinny laptop speakers or my crap desktop headphones. This does not flatter their sound, and it could use the help.

Tuning on this album is inexplicably sketchy, to the point where I think it's a production problem and not a rehearsal defect. The voices are terrific, and each individual line sounds in tune with itself. But together, the timbres rub the wrong way, the mix is off and/or the basses are fuzzy. This album doesn't have an unduly natural sound; it seems like there's a fix for this somewhere in the land of faders and EQ.

Because yes, the voices are terrific. The sopranos are high and clear, the tenors are talented, and the solos rock or swing or hustle as needed. In the jazz section, Jackie Schaefer does a dynamite Since I Fell for You, Eugene Lee offers a snappy, Rat Packish Have You Met Miss Jones?, and Jhanelle Graham sounds like she's chanelling Broadway star Kristin Chenoweth on The Best is Yet to Come. Even Evan Schapiro slinks through This Business of Love with such confidence that it elevates his fuzzy baritone. The rock songs are good, particularly Sunny Came Home and Sweetness, and Rebecca Fishman has a nice touch on Rinse. And over in disco land, Rose Muravchick gives Steve McQueen a fabulous groove and Crystal Chukwuma (Supa Dupa Love, Rock Steady) has terrific pipes straight out of the Gloria Gaynor, Shirley Bassey tradition. I think she got a raw deal by leading off with Rock Steady — it's a good song, but abrasive and might turn people away at the gate. Especially 'cause there's nothing else like it close by.

This is a great album for the a cappella junkie, the iPod genius or the loyal fan. For the regular world, it falls short. Better luck next year?

In the now nearly quarter-century since its founding, Penn's Counterparts have evolved a great deal — and I'm disappointed to report that it's not all for the better.

In the old days, jazz standards were, well, standard, and the occasional pop tune was the exception rather than the rule. Their first five albums featured a wide array of jazz classics from Manhattan Transfer to Ella Fitzgerald to Take 6 to Lambert, Hendricks and Ross, with the occasional foray into the shallower end of the pop music pool. There was a seamless blend, excellent tuning (in the days before auto-tune, no less), a sophistication and intelligence to the arrangements and, most of all, a real flair for the style of music they performed.

In the mid to late '90s, under the guidance of Dennis La and then John Stephens, the group took a sharp turn into more pop/rock-oriented repertoire and never really looked back. Sure, they still performed jazz, but most were re-treads of material arranged by music directors of yesteryear. And truth be told, such were the talents of Dennis and John that the sudden change in repertoire, while disappointing to me personally, was not as upsetting as it might have otherwise been under lesser leadership.

But starting somewhere between Turnover and Ten, and continuing thru to this 12th and self-titled album, the cracks are really beginning to show. The mainstream tracks are just serviceable but not stellar, generally utilizing either big block chords and/or layer-upon-layer of sound, neither of which proves terribly effective and all of which gets taxing on the ear as the album progresses. Songs like the opening Rock Steady are busily, if not compellingly arranged, while others like Beth Hart's Hiding Under Water are pleasant enough, if not really interesting at all. Even more disappointing are Moondance — a brave effort at a novel arrangement, poorly executed — and Freedom which is just plan lackluster, from soloist to tuning to arranging to performance. But perhaps most notably throughout the album, dynamics are all but forgotten — virtually everything starts at least at mezzo-forte and generally ends at fortissimo or louder.

To their credit, the Counterparts have attempted to include some new jazz material, perhaps in an attempt to return to their roots. Rather than resurrect age-old arrangements (they've recorded Dan Coleman's wonderful version of Manhattan Transfer's Ten Minutes til the Savages Come no fewer than four times), they've taken a somewhat traditional crack at standards such as Isn't it Romantic? and The Best is Yet to Come and a jazz-influenced approach to Robbie Williams' Have You Met Miss Jones? and Buddy Johnson's Since I Fell for You among others.

The results are mixed at best. None of the current arrangers have the facility with jazz to really elevate the material above average/good. In particular, the recognition that "less is (often) more" would be most welcome as most of the arrangements are too busy and/or straightforward, lacking the "feel" and finesse that typify quality vocal jazz. That, or hit up your gifted alumni for some arrangements!

The Counterparts used to have their niche and used to be among the best at what they did. Now they just seem to be OK doing what other groups — pop/rock or jazz — are often doing better. Pity.

I've been looking forward to reviewing the next Counterparts album since I reviewed Free Ride in 2003. On Free Ride, the Counterparts got everything right... except the musical basics. The group's blend, pitch, and cutoffs were all spotty. Too many of the album's soloists, though energetic, felt like rookies. The Counterparts' shining talents managed to beam dully through a smudge of problems. Free Ride sported arrangements that built masterfully and showed off memorable arranging touches, interesting syllables, and very contemporary chord structures. Free Ride had most what I ask for from collegiate albums — spirit, creativity, even a spiffy jacket cover — but didn't show off the chops to make it worthy of greatness.

Counterparts accentuates the positives that made Free Ride good, but shows only marginal improvement on the problems that dragged Free Ride down. The album shows great singing energy on nearly all tracks. The arrangements are comparable to Free Ride, but sport new finishing touches like transitional effects and beefy vp courtesy of Gabe Mann. The vocal percussion, nicely rounded off and sometimes effected, is a vast improvement over the tentative, mouthy stuff on Free Ride. The bass part, warmly eq'ed, has credible pitch. The soloists have matured in style and technique. Even the group's entrances and cutoffs are cleaner. But, damn their stubbornness, the Counterparts still have not made some badly needed adjustments to intonation and blend in their higher voices.

For an album this gifted with good arrangements and soloists, weak pitch and blend should be a crime. Like Free Ride, Counterparts is literally two counter parts — half jazz, half rockin' fun. Many of the jazz standards aren't particularly memorable because of blend and pitch problems. A strong soloist carries a mushy background in This Business of Love. Moondance bites off more than it can chew, with a so-so solo and spotty blend midsong. The well-styled solo of The Best Is Yet To Come is ruined by an unhinged key and overloud mid-voices. Flatness and over-crescendoed phrases beat down a warm, lovely alto solo during Isn't It Romantic?. The light touches and turns of a very En Vogue solo in Since I Fell For You are meat-cleavered by a loud background in the verses. Ugly blend on bright, tenor syllables in the choruses of Alone trash an energetic, stylish solo and groovin' arrangement.

Some great soloists almost get away with bad pitch moments through good style and energy (Sweetness, The Best Is Yet To Come, Hiding Under Water, Have You Met Miss Jones?). Clashing sopranos and reaching tenors cause some major blend problems, rendering songs that could have been good just average (Moondance, Hiding Under Water, Isn't It Romantic?, Since I Fell For You, Alone).

Even the album's best songs, the rockier ones, rely on energetic singing to power through some pretty rough pitch/blend moments (intros of Rock Steady and Rinse, tenors in Steve McQueen and Supa Dupa Love). That said, The Counterparts really sell the rock songs on this album. The fervor is palpable, and I love it. The soloist on Rock Steady is powerful, backed up by a strong soprano "what it is". The delicate (untuned) "din doh"s are powerful in their suddenness on Rinse, and I love the desperate energy that builds throughout. The energetic "hoo hoo"s of Steve McQueen combined with rollicking vp and a bluesy rendition of Sheryl Crowe make for a fun listen. Awful blend ushers in Supa Dupa Love, but the groovin' arrangement and pure blues solo redeem the song easily. I'd love to hear a blues, rock, doo-wop album from this group, sans jazz.

I'm left a little disappointed with Counterparts. Too many of the songs felt shaky. For a group that can build an arrangement and belt out a solo as well as The Counterparts, every album should be rock steady.