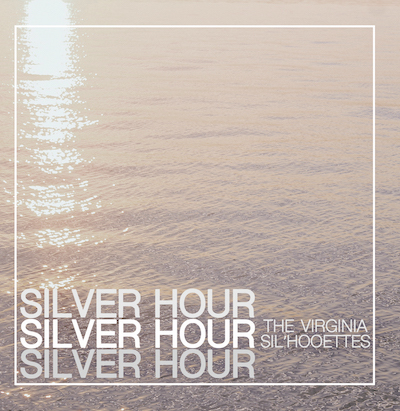 The Sil'hooettes from the University of Virginia have continued their sonically serene song-making on the group's latest recording, Silver Hour. While there is superb music, as the Sils remain some of the best singers in the collegiate realm, the overall affect is a bit too languid for my tastes. The album is solid, just not very satisfying.

Interestingly enough, the album starts with The Valley, a very cordial/choral arrangement reminiscent of the treacly Kaleidoscope Heart that was making the rounds a few years back. The ladies sing it well, but placing this song at the forefront doesn't pique my interest enough in listening to the rest of the album (though of course I did, numerous times). The second track, Leave the Light On, could have filled this spot better, showcasing both the natural vibe and silky smoothness that seems to be the overriding theme of Silver Hour. And after listening to the album numerous times, I really think that a stronger track order would have been to pair the excellent Muddy Waters with The Valley as the thematic closer. Just a thought.

What may strike the casual listener as a major oddity is the tendency towards abrupt endings on many of the songs, songs that simply stop without some strong indicator that they are about to, or in fact, that they should. The ill-advised Make Me Feel / Kiss was what clued me in. The ending caught me so off-guard that I had to rewind it a few seconds to make sure that my computer hadn't produced some sort of blip that caused the sound to cut out. Alas, I can't fault my iTunes® or Spotify®; this track was designed and produced this way. This is a small quibble that I'm going on about when it's not that big of a determent to otherwise sufficient arrangements, but I'm old school enough that I always listen to albums straight through, rarely skipping tracks, so listening to these tracks as singles wouldn't have affected me as much. Though after hearing it on Bellyache and Waiting Game, I'd grown tired of the arranging trick and paid more attention to it instead of being able to enjoy the songs as much as I want to.

The production on this release is lush with enough ethereal and atmospheric elements sprinkled throughout to create a pleasing accompaniment to an afternoon chillout session. Aptly named, Silver Hour is a good album but simply doesn't quite warrant a review as if it were the gold standard.

The Sil'hooettes have a long history of great-to-exceptional recordings (you have to go back to 2004 in RARB's archive to find an album with a composite score lower than 4.0), and Silver Hour seems poised to continue that tradition. The Sils — in conjunction with James Gammon (who recorded, mixed, mastered, co-produced, and co-edited the album), have struck gold again.

The album starts out beautifully with the 90-second teaser The Valley, whose group presentation and beautiful arrangement (Molly Murphy) would seem to end much too soon — except that it leads straight into the equally beautiful Leave the Light On, which continues the first's tone so seamlessly that I was surprised to see a different arranger (Emily Dietz) in the album credits. These two songs make a great pair, setting the stage for the Sils' thoughtfully-paced songs that are arranged with just the right amount of complexity to keep things aurally interesting but not crowded.

There are a few equally solid one-two punches on Silver Hour: the smoldering Waiting Game melts seamlessly into the brighter, lush No Goodbyes, which might be the best song here with its cascading background lines and beautifully-paced lead from Caroline Orr. In fact, the Sils are at their best when they settle into a moderate tempo — Don't Kill My Vibe has highs and lows and transitions through several differently nuanced arrangement sections (Sarah Donnelly and James Gammon), but never veers off the rails at an unnecessary pace. And album-closing Muddy Waters starts slowly and quietly but explodes into the soulful belting (Dietz on lead) that too many all-female groups overuse. Here, to close out Silver Hour, it's perfect.

As with previous releases, the Sils have a number of songs here that are pleasantly performed but not super memorable. Changes and Bellyache are both lovely, but they don't stick with me once the songs are done. They might stick with a different listener more memorably, but for me Silver Hour is split between richly arranged and performed songs that I cannot stop thinking about, and those that feel like palate-cleansing transitions before we get to another standout track. These are all beautifully-performed songs, it's just that some of them are home runs and some of them are merely singles or doubles — but Silver Hour as a whole is an enjoyable listen with a handful of super memorable tracks.

When I last heard the Sil'hooettes, I applauded the group sound as "simple, yet elegant and powerful". The newest release from the ladies of the University of Virginia, Silver Hour, is described as "the moment just after the sun has set, when the remaining light casts a soft silver glow". That description alone gives a strong indication of what kind of album this will be, and it's a welcome thought. Silver Hour takes the well-executed serenity the Sils have seemingly perfected over the years, and highlights it in the best way possible. However, the overall lack of impact leaves something to be desired.

The Valley is a very interesting start to an album. The track is incredibly faithful to the Betty Who original, and comes in at around a minute and a half in length. When I first heard the track end, I thought there might have been a production issue. The chords presented are delightful, but there is no added direction to the number. I have seen many albums, both a cappella and instrumental, that utilize a track like this in a number of ways, whether as a bridge between musical thoughts or an introduction to another track. However, this song merely seems to exist as a standalone number. As a single track, it lacks a lot of direction. The overall dynamic contrast is between a mezzo-piano and a mezzo-forte. There is nothing driving the tempo, and a lot of empty space. It gives hints of how Silver Hour will proceed.

Leave the Light On gives a very different impression. The backgrounds are much more rhythmic and intent on setting a groove. The chords underneath the soloist are colorful and work as a great juxtaposition to all of the rhythmic patterns elsewhere in the track. Emily Dietz's arrangement is multifaceted in ways that make the track fully encapsulating for the listener, and it's very well done.

By the time most tracks have finished, it's very obvious that this album does not center around being driving and impactful. This makes a lot of sense with the idea of serenity presented in the liner notes. Though from a listening standpoint, it almost becomes boring. The songs aren't driving to a well-defined climax. There are very few moments that drive towards making the audience pay attention. This album can very easily become background music. Many of the tracks are much more mellow. The percussion isn't pushing the beat forward. The dynamics are minimal overall, resulting in any climatic impact being muted. The album just feels rather boring for a large number of tracks.

Then there's the last two tracks of this album, two very contrasting numbers that are both very impressive. Don't Kill My Vibe is an arrangement filled with subtleties that weave in and out with each other to create a tapestry of sound. Meg Foster floats over the top of all the sounds to tell the story. If I'm picturing the serenity of a silver hour, this track is exactly the sound I'm thinking about. Muddy Waters is the exact opposite in every way. Emily Dietz doesn't float over the background — the background mirrors her performance, building towards the climax. By the time all the emotions have been shared, Dietz is almost screaming through the speakers. You can hear little cracks and imperfections in the solo, and it adds to the pleading nature of the piece. These two tracks are both sides of the Sils that listeners waited an entire album to hear, and they're worth it.

Silver Hour is an interesting album to review based on the overall lack of story arc present. The opening and closing numbers of this album are strong while most of the middle is well-presented, but rather lacking in impact and direction. The main takeaway is up to the listener. Is the serenity of the album intentional? Are the opening and closing tracks the points of emphasis? Check it out and see what you think.