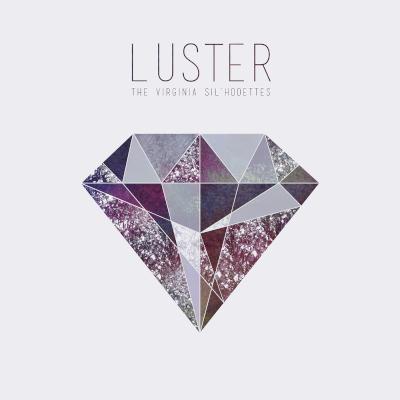 The University of Virginia Sil'hooettes review themselves in their liner notes, describing Luster as reflecting "both beauty and strength" and "a concrete wall of sound yet each voice shimmers". We are invited to allow the "intrigue of the arrangements" and "sparkling melodies" to mesmerize. We are instructed to "surrender to luster".

The Sil'hooettes set expectations high and make good on their promises. They received 2016 CARA nominations in every Female Collegiate category: album (the winner!), soloist and song (Sophie Maus, runner-up on I Will Never Die), and arrangement (Alex Peterson, runner-up on Wait It Out). They also landed a spot on BOCA 2016 with the opening track My Gun. With so many accolades, Luster is almost a known quantity.

The tuning and blend are impeccable, the arrangements are solid, and the roster of talented soloists runs deep. Nobody doubles up on solos, and each woman's voice does indeed shimmer, from Maus and her well-deserved CARA nomination to sultry Tiffany Chong on Good For You and Chadia King's rich turn on Breathe You In My Dreams.

The Sil'hooettes have also achieved a wonderful synergy with engineer James Gammon. He adds to the luster: the bass line is octavized, the percussion is thickened, and any bobbles of a live performance are smoothed and removed. Luster presents the Sil'hooettes as the best they can be, which is very good indeed.

Teensy nitpicks. Despite the stellar arrangement for Wait It Out, the soloist has to reach a little for the lowest note, though when she is in range, her voice shines. Could it be sung a key up? Grown Woman could also use a less clunky introduction. The soloed bass line syllables were a bit forceful and distracting with the "dom diga dom diga"s. Perhaps the repertoire could use a little more diversity to take it from a good listen to an exciting listen. These issues, however, are de minimus.

So go ahead. Surrender to Luster.

The University of Virginia Sil'hooettes are a phenomenal group. Since the group's inception it has been graced with excellent musicians and singers, strong arrangements, and an energy that is infused with life and vitality. So I am baffled as to why there are only two of those three areas offered up on the group's latest release, Luster.

Luster is the definition of an atmospheric album. It's all sweeping ethereal moments as puffs of sweet cotton candy envelop you in a funhouse of Enya and Yanni soundscapes. And there's only so much of that sort of pallid sonic expression that one can stand for an extended period of time.

And that's the problem that I have. THE MUSIC IS SO DANG GOOD — all ten tracks and 35 minutes of music. But not all together. They could choose, let's say any four tracks, and pair them with two really slow ballads and four really up-tempo and/or hard-driving songs and this would have been an essential album to have in your collection. But unfortunately, they haven't and so it isn't.

I can't really pull out any super negatives or super positives with the album. The scores that I have given as averages are on songs that I thought were done a disservice by this approach in the production. These three — Grown Woman, Waiting for You, and I Will Never Die — just need more grit and grime. I mean you can't sing a song about being a grown woman when it doesn't come across that way at all. It sounds more like we thought adults sounded like when we were playing dress-up as children. Which isn't a slam at soloist Anna Rigsby, she's actually pretty ballsy. And you can't sing a Delta Rae song effectively without ripping the guts out of the performance. But it is imperative that this gut wrenching happens in the background as much as it does with the solo. Sophie Maus delivers, but the backs don't to the extent that they should. Blah blah blah ditto ditto with Waiting for You. Wait It Out is on the list because it is the wimpiest of them all, and the lowest notes aren't in the singer's wheelhouse.

That is, except for Echo. I love it. Loved every minute listening to it and am still listening to it now as I'm writing the review and will probably still be listening when you all are reading this. Sarah Donnelly and Elisabeth Fellowes are commanding in their performances. The arrangements have a lot of vitality (though there is one deadspot during the repeated "it don't matter/to me" after the first verse, but that's a quibble — because there is a marked difference in the backs every time they sing it afterwards — on an otherwise brilliant song).

Luster is a sleepy-time album. It's great as background music because there isn't much to grab your attention — not much luster at all.

The Sil'hooettes captured lightning in a bottle with the 2014 album 1989, which was nearly flawless and earned my Honorable Mention for Pick that year. The Sils' follow-up, Luster, is also lovely to listen to, but it never quite achieves the WOW factor of its predecessor.

There are still some gorgeous moments here. All arrangements on Luster were written by one of the group's MDs over the last three years: Alex Peterson ('13-'14), Moira Lennon ('14-'15), and Hannah Montanez ('15-'16). And without exception, they're all beautifully-written and well-executed. Lennon's arrangement of Grown Woman is intricately nuanced, and the group nails every note. Peterson — whose arrangements impressed me so much on 1989 — strikes gold again with Sinners, which is probably the best all-around song here, from its dreamy arrangement all the way up to Susannah Saunders' moving solo performance. Runner-up for best performance is the dramatic, haunting I Will Never Die, which benefits from Lennon's solid arrangement, Sophie Maus's perfect solo, and just the right dynamics from the backs.

Still, Luster is missing something. What these women have captured is good, but it's just not enough. There aren't enough dynamics, there isn't enough emotion in the leads (or the backs), there's not enough drama to make these particular songs truly memorable. The final build in Love Me Like You Do should have been bigger and more impassioned; instead, the sameness makes it feel repetitive. Other songs here suffer from that same repetitiveness — My Gun and Echo start the album out on a particularly samey foot.

And then there's the matter of the leads. We were spoiled on 1989 with leads that were the Cinderella-perfect fit for the songs chosen, and the Sils don't quite achieve that here. Wait It Out feels uncomfortably low in the soloist's range until the airy choruses come in. For the most part, soloists here sound like they're merely singing the leads, not feeling the leads. There are a few exceptions — Mary Beth Brown has a few impassioned lines on Waiting for You that are memorable.

Overall, Luster is still an enjoyable listen: there are some complex, nuanced arrangements here, and these singers perform them with ease and grace. It's not an album I'll go back to often (save the two "5"-worthy songs I mentioned above), just because there aren't enough dynamics, emotion, and passion to make these songs truly memorable for me.