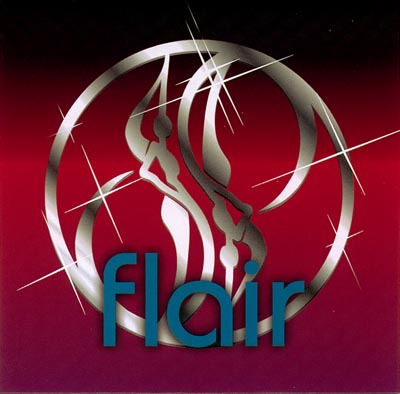 It really bothers me when I can't recommend an album that unquestionably features a group of extremely talented singers, but such is the case with the Virginia Sil'hooettes' latest offering, Flair. Adding to my frustration is that my inability to gush uncontrollably about this album has to do with everything except the quality of the singing contained therein.

Most groups are lucky to have a handful of singers with the precision, energy and pure voice that make for a gifted soloist — in this department, the Sil'hooettes' cup runneth over. Also to their credit, the Sils manage to meld these unique and individual voices into an ensemble sound that is lush and full, with a seamless sound that washes over the listener like ocean waves.

Normally the above pluses would be the core ingredients of a fantastic album, but it is the combination of poor song selection, sameness of arrangements, and ill-advised mixing that take this potentially "excellent" album and render it merely "good".

I was familiar with some of the music on this album and some was new to me. Didn't matter. At least 10 of the 14 tracks sounded virtually interchangeable. The Sils' arrangers clearly grasp the elements that have come to characterize collegiate pop a cappella in recent years — unusual background syllables, multiple layered rhythms, and vocal percussion to name a few — but they have chosen to manifest these elements in seemingly identical ways in almost every song. All of the grooves gravitate towards a bland, mellow middle-of-the-road feel; the ballads don't feel like ballads and the up-tempo tunes are barely that.

Ill-advised mixing only compounds the problems with the arrangements described above. It seems as though the engineer was determined to create a "wall of sound" on virtually every song, and in the process washed out the very elements which keep each arrangement interesting. Even when funky, crisp background syllables might have delineated a unique rhythm, these syllables are rendered all but irrelevant by the too loud power chords sung by the rest of the ensemble which are given equal, if not greater, prominence in the mix. The Sils are blessed with at least one or two women who can give them a solid low end (a rarity in all-female groups), but their efforts are for naught, as their lines are consistently mixed too far into the background. Ditto for the VP, which is hit-or-miss, but is never truly given the chance to accomplish its mission by a mix that seems to simply set everyone on "high" with plenty of reverb.

As for song selection, it's entirely possible that those songs I did not know only sounded like those I did know due to the arranging and mixing problems described above. But I'm pretty sure I didn't need three songs by The Corrs, one by The Sundays, and one by The Story, or at least not five such tunes that sound so monotonously similar.

As I said before, these ladies are superb singers both independently and collectively. Get them some more varied material, some well-crafted arrangements, and an engineer with a better feel for their sound, and I'll be first in line to buy their next album.

The Virginia Sil'hooettes' Flair showcases a diversity of arrangers, soloists, and percussionists, a welcome rarity among the ranks of college a cappella albums, too often dominated by select soloists or a single vocal percussionist.

The well-chosen opener, Ready to Run, displays a nice country twang in Di Johnston, equaled later by Mary Lorraine on Bye Bye Love. In fact, this album's greatest strength is the consistent quality of its soloists, perhaps the best group overall in recent memory. Highlights include Julie Ann Sgroi on Wild Horses (unfortunately, her only solo) and a professional-sounding Jennifer Kim delivering a fantastic, sensitive rendition of When You Say Nothing at All.

Flair's arrangements manage to stay interesting without taking any real risks, and sometimes shine. In this area, one person does dominate; former Music Director Ginger Brown captures the dynamism of the already-mentioned Ready to Run, skillfully moves voices and chords in the lush chorus of Crazy for You, and does the same as co-arranger of Runaway.

The Sil'hooettes are on the right track. If the opening of What Can I Do is any measure of their ambitions (it sounds like it was inspired by the same song on the USC Sirens' Surreal — 2001's CARA winner), then with Flair, they're well on their way.

Perhaps the only negative comment I could make is that...it's a really nice album! A bit heavy on the sugary sweetness. Songs like When You Say Nothing at All and You Keep Me Hanging On could really do with a bit more weight and raunch in the lead voice. It's all a bit too pretty.

I'm a big fan of The Corrs, and own their CDs, but out of fourteen tracks on this disc, three are Corrs covers. This is two too many for variety, and lost some points for repeat listenability from me.

There's plenty of talent residing in this group, including a really terrific bass who is singing down to at least C below middle C. A good bass is a rare commodity to be treasured! The arrangements are well structured and full, and all the soloists do a good job. Ginger's solo was possibly a little weaker than the other, but given that Is It Wrong is her own original composition, I forgive her. There are plenty of people out there who can sing, but not so many who can write!

A good CD, well worth owning, but next time I'd love to see these girls let their hair down and party a bit!

For ordering information, write to