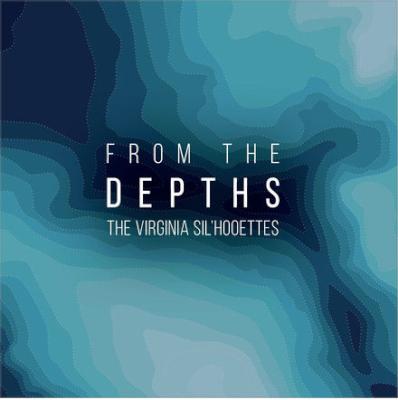 An album can really kick you in the gut in unexpected ways. And that's exactly what's happened with the Virginia Sil'hooettes latest recording, From the Depths. It's at once old-school, yet fresh, having an often organic quality that emphasizes the emotional aspects of each song, allowing them to explode from somewhere deep inside. While I wouldn't say that this release is soul-searching or even soul-revealing, it is full of soul. It's that album that you play when you're in that Yeah, they get me mood.

This won't be a long review because this album doesn't need a treatise on how effective, sublime and magnificent it is. The arrangements highlight what has become the signature of the Sil's sound — richly deep and rhythmic basses, soaring sopranos and amazing harmonies. The singing is absolutely sublime, enhanced greatly by the production skills of collaborator James Gammon (I say collaborator because as noted previously, Gammon completely understands the Sil'hooettes, having worked with them since at least 2004's Tangled, and his deft handling of their music is absolutely superb). The guys behind the scenes, like Dave Sperandio and Ted Trembinski, add the extra oomph where necessary in the production without ever going overboard. So while none of the tracks are of the face-melting variety, you'll be hard-pressed to find songs recorded so expressively and with such conviction.

I've fallen in love with Black Water Lilies as a song, but even more so as an arrangement. It's not even my favorite track on the album (ain't got a clue as to which is because it changes every time the track changes, but right this instant at 4:53PM on a Saturday it's Girlfriend. Talk about a song that can wrap you in velvet and strangle you in rapturous pleasure — this be it!). I took a while to appreciate the intricacies of Black Water Lilies. I think that this is the song that created the concept for the entire album. I shan't write the entire description from the jacket, but the "shifting currents", "riptides" and swallowed beneath the surface imagery is on vivid display within this arrangement. The raindrops fall, the waves lap against the sand, the tide keeps rolling in ever increasing pressure and presence. Sarah Donnelly crafted a masterpiece (as soloist and arranger and music director), and the Sil'hooettes rose from the ocean and washed ashore like the birth of Aphrodite. It is a stunning example of everything coming together to make a fantastic track.

Just get the dang album. You may not be able to come up From the Depths for a long time.

The most striking element of From the Depths is the Sil'hooettes' choices for soloists: on most of these tracks, the Sils feature lower-voiced leads, perhaps making From the Depths a literal description of the tone of these songs.

The result is a smoky, sultry aesthetic for the Sils, who have historically excelled at presenting a cohesive collection of songs. The best songs here are the one-two-three punch of One Time / Lips, River, and Canyon. One Time / Lips has just the right amount of movement to propel this smoldering song forward. Meanwhile, River features the album's most powerful and dynamic solo performer in Emily Dietz, while Canyon shows the group's exquisite phrasing. Later in the album, Black Water Lilies is a gorgeous, rippling song and one of my favorites to listen to; soloist Sarah Donnelly (who also wrote the song's lovely arrangement) absolutely makes this piece with her angelic lead. And Until the Levee is the perfect album closer with its dramatic arrangement and lead (Emily Dietz again!) that definitely leaves this listener wanting more.

The other half of From the Depths is very pleasant to listen to, but there's not enough dynamic variation, either within the songs or from one song to the next. Still, I'll take pleasant-but-fleeting any day when these songs are as exquisitely-performed as these are; I may not remember much about the arrangement or delivery of Girlfriend or Way Down We Go after the fact, but queuing these songs up again takes me back inside the world of the Sils' lovely arrangements and moving performances.

From the Depths is a wonderful addition to the group's strong body of work, and the Sils have done a lovely job capturing a particular mood and aesthetic throughout these ten songs.

When it comes to excellence in collegiate a cappella, the Sil'hooettes are a staple among the community. Nearing thirty years in existence, these women have made BOCA, sing, WACA, and Voices Only albums, as well as winning a handful of CARA awards, too. With a resume like this, I'm practically prepared to give them top marks without even listening to the group's album. However, once you listen to this release, you'll understand why the Sils are so well-known in the a cappella world. With a sound that is simple yet elegant and powerful, From the Depths is primed to be another staple of excellence for years to come.

Across the board, the solo work for this album is phenomenal, whether it's Elizabeth Kochard's glorious country sound on Canyon, Sarah Donnelly's pure tone just floating over the top of everything in Black Water Lilies, or Emily Dietz's raw power and emotion on River and Until the Levee. The latter of those last two is absolutely exquisite. I'm hesitant about groups having a ballad as the last song on the album. However, this is certainly an exception. Hannah Montanez penned the arrangement that set up Dietz to deliver an absolute showstopper. The backgrounds aren't ever trying to be a part of the foreground, but rather set up the soloist to succeed in every way. As the soloist swells in dynamic, so rises the group. When the climax of the piece finally arrives, it's dark and almost haunting, but absolutely beautiful.

The arranging is one of the points that makes the album so well done. There aren't a large number of frills. Don't Let Me Down had some extra work done in the studio to get that digital sound, but the other tracks are very pure. The arrangements aren't set up to be the spotlight — there's no incredibly intricate rhythms or exceptionally colorful chords. Everything is set to highlight the deep talent pool of soloists. The group is playing to its strengths and delivering it flawlessly.

After listening to From the Depths, it makes sense why the Sils have such a strong history. These women are not re-inventing the genre with a wide array of new ideas or experimenting with crazy rhythms and chords — this group is just flawless — a group always working to stay relevant and excellent. Give the Sils a listen and enjoy.