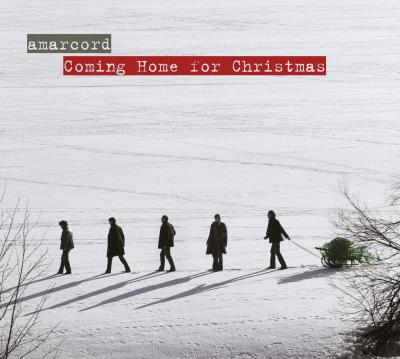 amarcord made a pops album this Christmas that is best viewed as a soundtrack from what is probably an extremely engaging holiday show. In a vacuum, without stage charisma or personal context, this recording's successes are far more murky. The songs are all over the map not just in terms of origin, which is this disc's official theme, but also in terms of style and mood and execution. This diversity would be fun in a concert hall, and once I figured that out I enjoyed the album much more, but before I came up with this framework it just sounded like a great big well-sung mess.

As always, amarcord's voices and musicality are in the absolute top tier of groups performing and recording today. In its sweet spot of classical and classically inflected singing, this group is either the best or close to it, depending on the day. This excellence guarantees good scores for all of the songs and defends against train wrecks. Still, they're not all things to all people. When amarcord trades choral arrangements for pop treatments, some times over the course of a single song, the transition can be jarring. And the singers can't sing anything close to unaccented English.

This accent business gets important when you want to make a world-class pop album. amarcord's core sound is built for churches, not nightclubs, and now suddenly the group wants to sound like the Real Group. Enunciating like Ahnuld or Goldfinger doesn't cut it anymore. These guys are so talented — I don't understand why they didn't get an accent coach and learn Winter Wonderland and Hark! The herald angels sing sound by painstaking sound. It doesn't matter whether the members speak with an accent — if they want to sing American-style contemporary pop music, they need contemporary phonetics for their songs. This even goes for the non-English pieces — as lovely as I find the swingy Il est né le divin enfant, I want it to loosen up. It's a song about the Christmas baby, so I forgive amarcord for not going whole hog French luxe (or perfecting French accents either), but the song doesn't quite click.

Contemporary is the name of the game even for the more classical tracks on Coming Home for Christmas. I get why the group did that — amarcord already made a definitive classical Christmas album, the sublime Nun komm der Heiden Heiland. But. It comes with some limitations. I find the dissonances, tempo shifts, and key changes of modern Christmas music to be just as clichéd as the open fourths and fifths of traditional carols, without the old stuff's natural charm. That requires a more discerning eye in the arrangement picking. Track four, the Swedish carol, is perfect. The Matthias Becker setting of Noël nouvelet pushes the envelope further and still succeeds, as does Becker's Fum, Fum, Fum. I like the Finnish opener and was completely won over by Betelehemu, a Nigerian number that comes with its own drummer and some really well executed rhythmic counterpoint.

But Stille Nacht tries too hard and falls on its face. The Matthias Zeller version amarcord chose starts with a lovely first verse, stumbles through an uncharacteristically out of tune tag, and then changes keys into an overwrought middle verse before settling back into something more cleanly contemporary for the final verse. The other German number is a classic eurojazz number, the sort of Take 6 in translation that never quite makes its way back across the Atlantic in one piece, even when handled as skillfully as it is here (the trumpet solo is great, the sort of surprising and impressive departure I think the group hoped the entire album would be). And then we have Parang Christmas Chutney, an exuberantly excessive Caribbean number that would be best placed on a children's album.

All of this excess would be fun in person. I enjoy a good concert and it's clear these guys have the energy and virtuosity to get all of these songs over live. That said, I miss the coherence of amarcord's earlier albums, so focused and perfected and marvelously right. I can find many things to praise about Coming Home for Christmas, but I cannot unreservedly recommend it.

The quintet amarcord compiles a stunning array of international holiday tunes on Coming Home for Christmas — represented here are songs from Finland, Germany, Sweden, France, Nigeria, Poland, Tyrol, England, Catalonia, Trinidad & Tobago, and the USA. Many of the foreign tunes are instantly recognizable — Stille Nacht of course, Fum, Fum, Fum, and a jazzy Il est né le divin enfant — but many of them are also pleasantly new to me.

A lot of these new-to-me tunes are lovely: album-opening Juokse, porosein! as well as Noël nouvelet make especially memorable impressions. But what makes amarcord's music so stunning is its care with every single note in every song. Each song has its overall dynamics, but this quintet knows how to massage every note — each note has its own journey, and the group has such mastery of control and volume that this album is a delight to listen to.

Overall, though, Coming Home for Christmas is a beautiful album of international holiday tunes, sung by voices that deliver a moving, intense performance.

Coming Home for Christmas is an absolute delight. A concept album at its core, it presents a worldwide view of Christmas music: a musical journey that shows us amarcord's enviable skill as a vocal ensemble. The five members of the group are in top form here, making use of their incredible vocal ability while weaving through varied and challenging music. Most of all, though, Coming Home for Christmas is a smartly-produced and -programmed album, indicating that amarcord is a group that understands its strengths.

Christmas is a joyful time, but it is also often solemn. amarcord's balancing between these two emotions is powerfully done: an album full of cheeseball charm like Winter Wonderland would grow obnoxious, and an album entirely composed of respectful ballads like I wonder as I wander would be uninteresting. The material, choral and jazzy, haunting and humorous, blends together masterfully. amarcord, with its sincerity and dedication to the music, really earns the emotional pay-off that Coming Home for Christmas provides.

If you've heard amarcord before, you're well aware that these gentlemen are stellar vocalists. Not only is their group sound polished and precise, each individual voice is compelling and beautiful in its own right. I also admire amarcord's willingness to take vocal risks, expanding its sonic palate to include different tonal characteristics. Though ostensibly a "classical" vocal group, amarcord show a distinctly experimental side to its singing.

The album is sleek and modern-sounding, and it's here that I register my only complaints. I realize that pitch correction, tracking, and bright, chorus-laden vocals are becoming the standard in the a cappella world, but not every a cappella track cries out for this specific sound. Bill Hare does the mixing here, doing a professional and solid job as always, but I can't help feeling that my problems with this album's production lay with more conceptual issues in the engineering. There are tracks here (the magical Jezus malusieńki, for example) that could have benefited from a "live off the floor" recording. Sanat, Rajaton's choral album, was controversial for its toned-down aesthetic and live sound, but for me it achieved a raw personal sound that Coming Home for Christmas lacks in its more produced moments. amarcord's beautiful choral blend could translate into some genuine spine-tingling moments, but these moments never materialize under the harsher glare of studio lights. I don't begrudge the modern sound on every track, but there are moments where the mood just isn't right.

Coming Home for Christmas is a fantastic album, and there are tracks here that will surely make it onto my holiday playlist. The liner notes for the album evoke a sense of wonder at the season, a nostalgic remembrance of what made Christmas so special to us growing up. This wonder is felt on the album, too.