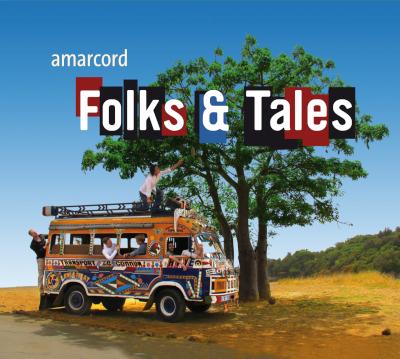 Amarcord takes a page out of the King's Singers' playbook with Folks & Tales, its new collection of classically-arranged folk songs from around the world. The repertoire is lovingly and extensively gathered. They present it here interpreted by a wonderful and diverse group of arrangers who seem to have worked with this collection of talented singers in mind.

Picking a German song to start was the perfect call, since it shows the group at its native finest and also sets the stage for the lighthearted journey to come. The music flits between choral showpieces and upbeat numbers with a more novelty feel.

Two tracks in the middle exemplify the contrast. The Czech Červená Růžžičko is one of the more chorally-arranged numbers and one that seems to require the least cultural translation. It's followed by an especially ennunciated version of Hava Nagila. I love that a German group picked an Israeli song to bring a little more joy to their new record. At the same time, the fast bits have a beer-barrel polka roll to them. And I've never heard a group perform this song with such a consistent and audible space between the two syllables of "Hava" in all the slow bits. These quirks show the joy and the challenge of most of this music. It's going to be familiar to somebody, and those somebodies are probably going to be startled by what this group did with it.

Nine Hundred Miles Away from Home will probably be the hardest sell to an American audience, precisely because it's such a familiar song. People who know and love the song may be jarred by the decidedly un-American pronunciation, the overly jaunty arrangement, and the train sounds (hello again, King's Singers). That said, it's a beautiful song and a creative arrangement and amarcord sings it very well. The slow bits are nicely haunting and that one ornament succeeds every time. I personally can't fall in love with this performance because I know the song too well, but I also wouldn't fault anyone who meets this song here for the first time. It's a great song and it deserves to circle the world.

Circling back at me are two Asian numbers arranged by Sidney Boquiren, a guy I crossed paths with in college and who I'm pleased to see is still in the music business. He's presented amarcord with a lovely choral arrangement of the Thai Lom Nao, which he says in the liner notes is technically not a folk song, and also a great setting of Pen-pen de Sarapen. This was one of my favorite tracks on the disc, so it was an even nicer surprise to see Sidney's name in the liner notes and his evocation of this Philippine folk song, one of the first he ever learned as a child.

Da N'ase from Ghana has an almost South African feel to it to me, probably due to years of conditioning by Ladysmith Black Mambazo. The swingy background also echoes Don't Worry Be Happy in its thanksgiving praise. It's a good motto to follow to appreciate this ambitious and engaging recording.

Ensemble amarcord, the Leipzig-based quintet, embarks on a literal world tour with Folks & Tales. Nearly twenty different folk traditions are sampled and distilled for the listener's "dining" experience. In each case, the country of origin provides the dominant spice, but these aca-chefs bring bold, new recipes to the table for a folk-classical fusion. The result is a feast of mouth-wateringly delicious music.

It's been said before but bears repeating: the musicality of amarcord's singers is so superb, so detail-oriented, and so graceful that they could sing the phone book and listeners would be thrilled. The fact that they've turned their skills to such well-loved music is a pure delight.

Amarcord not only borrows from each culture's historic folk music heritage, but the group also touches upon the culture's living representatives as well. Arrangers from all across the world breathe new yet authentic life into these timeless and well-worn tunes.

Picking favorites is a pointless endeavor as the choices reflect more of the listener's mood than the ensemble's skills. But that said, listeners would be wise to return to Waltzing Matilda, Arirang, Pen-pen de Sarapen, and even Hava Nagila, on many an occasion. Even the liner notes are a joy to read, adding a wealth of information to the listening experience.

The production is clear and more present than on prior recordings, a choice which suits the material well. However, the well-schooled ear will detect some slight artificiality in the tuning on a few of the tracks, an unusual artifact for this already finely-intonated group and a mark of the modern recording era. A few clichéd choices (like the old-time radio effect) and a delay or two seemed unnecessary, but where balance is concerned, the production is absolutely spectacular.

Of the group's 2009 recording Rastlose Liebe, I wrote: "Their vowel match and diction are ideally aligned and their balance is like a beautiful tapestry in which the parts with exciting colors move briefly to the front and then fade back in, to be woven back in to the image as a whole." Impossibly, the statement is even more aptly applied to Folks & Tales as the artful play of dynamics practically leaps from the speakers.

From time to time, several RARB reviewers have gently criticized amarcord's pronunciation of English. It is a notoriously challenging language. Things have improved. On The Last Rose of Summer and Waltzing Matilda, the English has an affect, but it isn't distracting or inappropriate. Nine Hundred Miles Away from Home may be divisive among listeners. But one song deserves special note.

In Cockles and Mussels, the haunting tale of an Irish lass whose life is cut tragically short, the lyrics proclaim: "She died of a fever and no one could save her." The words are pronounced in something approaching standard English with a slight German accent. It's perfectly fine for purposes of comprehension. But, in an Irish accent, fever and save her are rhymes. That experience is lost in this rendition. Is the piece still musical, still beautiful, still moving? Absolutely. But whether a deliberate choice or otherwise, there is something important that failed to cross the divide.

To be clear, the picayune comments are for the group in its quest for perfection, not for listeners. The listeners will simply fall in love and be swept away.

"Excellent" is amarcord's rating, but the category is simply too coarse for such refined singing. This ensemble is in a class above.

The last album I reviewed by amarcord, Rastlose Liebe, is one of the best a cappella albums I've ever heard: perfect scores in all categories for each of the twenty-seven tracks, from all three reviewers. I still consider it a "perfect album". That was three and a half years ago. Naturally I was excited about getting a new album to review ... would it be as good? Would the group continue its standard of excellence? Continue reading for the answers.

As you might gather from the title, Folks & Tales is not a classical album like Rastlose Liebe. It is an album full of folk songs from numerous traditions: Ireland, Australia, Germany, Russia, Japan, Judaism, the U.S., and more. The songs are generally short, with the entire seventeen tracks comprising only 53 minutes. The English songs display a trace of an accent, but not so much as to detract from the music. I can't speak to the enunciation of the other non-German languages (the singers themselves are German).

Two of the three songs I initially recognized on the track list, Waltzing Matilda and Cockles and Mussels (the third being Hava Nagila), are two of my personal favorite folk songs, ones that I've sung with my own children practically since the day they were born. Amarcord does a great job with them, making Waltzing Matilda bouncy and bubbly ... until the penultimate verse when it takes a more somber tone as the words about the swagman's ghost suggest it should. Cockles and Mussels coincidentally is somewhat similar, becoming more serious towards the end as it describes Molly's ghost. The arrangements of both are excellent, with voices entering and leaving the mix of the group, alternating soloists from different parts, containing moving parts at times, block chords at other times, major chords, minor chords, and so forth. The arranging of the other songs on the album are nearly always similarly engaging and entertaining.

I recognized a few more songs once I heard them, but generally these songs are new to me. And I had a fun experience as I was listening to Sakura, sakura, which I thought I had never heard before — my 13 year-old daughter popped her head into the room and said, "Hey, is that Sakura?" Turns out she'd sung it in a school choir.

My favorite song is the first song: Es klappert die Mühle am rauschenden Bach ("The mill rattles beside the rushing stream"). The singers kick-off the track — and hence the album — with a repeated "klippity kloppety, klippity kloppety" that continues beneath the melody for nearly the entire song. Without knowing the translation, I'd think they were mimicking the beating of horse hooves, but the repeated texture also works fantastically as a rattling mill. It just makes me smile from the get-go and is now one of my favorite a cappella tracks of all time by any group.

I could go on and on pointing out additional things I love about the album, but instead I'll conclude by answering the two questions posed in the first paragraph. I say: No, this album isn't quite as good as Rastlose Liebe. But just by a whisker. If that album is a "perfect 10", then this album is perhaps a 9.98, losing some fractional points due to a couple of the arranging and production choices — but most certainly NOT through any failure of the singing. The singing throughout is of the utmost high quality. So, to answer the second question: Yes, this album indeed continues the standard of excellence set by Rastlose Liebe. I love Folks & Tales; I will be listening to it for the rest of my life, and I highly recommend it to all.