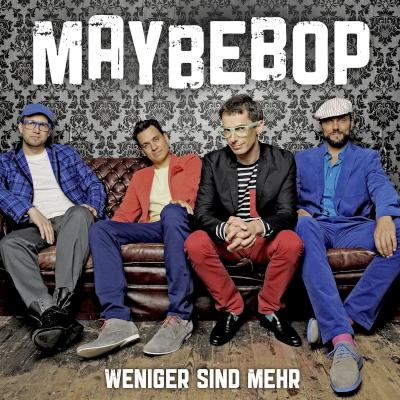 Maybebop's Weniger sind mehr ("Less is More") marks a return to the native tongue for this German quartet. This release also marks a return to simpler arranging and slightly more restrained studio production. The focus for Maybebop is on the story: a generous fourteen stories to be exact. Many humorous. All in German.

Of Maybebop's Endlich authentisch, this reviewer noted that "Maybebop is one of the most consistently entertaining artists in contemporary a cappella and even if you don't speak a word of German, the music alone is a terrific listen." Weniger sind mehr is still entertaining, but more than ever, speaking German would really help.

The musicality is still present, the production is still top-notch, but these elements don't quite stand apart as they did on Endlich authentisch. On Weniger sind mehr, the elements merge in service to the story.

And though the liner notes are very attractive and extremely detailed, the lyrics just aren't translated. That partially closes things off for the English speaker, the presumed reader of this all-English website.

Weniger sind mehr is original, upbeat, fun, smooth, playful, and energetic. Maybebop sings delightfully about the future, about ecology, about eating insects, about love. With Google translate, you'll get that far, but some meanings translated with a computer will remain murky. Take this "translated" snippet from Beim nächsten Mal ("Next Time"):

With so what I really bursting the collar
You I shall speak my mind;
Almost had I really said what — you forsake it, I'll do it
Next time

If you're OK with that level of lyric-speak, then you'll love Maybebop. But for this listener, the experience left a few gaps that native speakers wouldn't suffer. It's hard not to adore Maybebop anyway, but this isn't the album to best cross the cultural divide.

When I first received Weniger sind mehr ("Less is More"), I turned the album over to look at the track list on the back. My immediate reaction: No they didn't!! It's got Erlkönig on it?? What?? The same Goethe poem that I memorized in high school German class? The same art song composed by Schubert that was one of my favorite pieces we studied in my college Music 101 class? Yes, indeed. For those unfamiliar with the composition, it tells the story of a child who is killed by the sinister elf king while riding home with his father. As the elf king begins to physically assail the child when he refuses to come along willingly, the boy's father remains oblivious to the attack, unable to perceive the supernatural being. Schubert's version of the song is written for a soloist with piano accompaniment. The soloist sings in four different voices at various places in the song: the narrator, the father, the child, and the elf king.

Anxious to see what Maybebop would make of this, I hastily opened up the album, popped it in my player, and jumped to track twelve. My mind was immediately blown. It's genius. Genius. I doubt I can adequately convey the reasons for my love and admiration for their version of this song, but I will try. First, Maybebop didn't try to mimic the Schubert piano accompaniment. They do use most of Schubert's melody and chord structure, but do so in the form of a rock ballad with heavy bass, vocal percussion, etc. They use three different singers (I believe) to cover the four parts. The music in between verses often contains two heavy bass hits followed by a simple eighth note "oh-oh-ohh, oh-oh-oh-oh-oh" rising then falling arpeggio. This is very different than anything done by Schubert, but really adds to the sense of impending doom. The music alternates abruptly between the honey-smooth temptations of the elf king ("Dear child, come go with me. We'll play lovely games. My daughters will wait on you. I love you, you excite me!"), and the frantic pleas of the child for help from his father ("My father, my father, do you not hear the elf king's promises?! Don't you see his daughters? He's grabbing me now! He's hurting me!"), the latter using a heavy metal background. Then, instead of coming to a simple, quiet end after the closing words "in his arms, the child was dead" (as done by Schubert), Maybebop provides a few final seconds of electric guitar wailing to mourn the loss of the boy. Wow, just wow. I can listen to this again and again. (And I have.) They've taken Schubert's masterpiece and changed it in ways that make it even more gripping. This song alone is worth the "price of admission" for this release.

Whew. How about the rest of their work? Well, nothing is as dramatic as Erlkönig, but lots of it is great music. As is typical for Maybebop, they alternate between serious, comedic, and sarcastic songs. The comedic songs are not as strong musically as they have been in past albums, but they do provide entertaining lyrics such as in Esst mehr Insekten which describes how we should help the climate by eating more insects instead of schnitzel or steak. Sometimes it's hard to tell which is comedic and which is sarcastic, such as Alles in den Genen which explains how nothing you do is your fault because it's all programmed into your genes, or In zehn Jahren (complete with a sing-along section at the end) which predicts how the world will be so much better in just ten years, with cancer cured, an energy crisis averted, astronauts traveling to Mars ... and how "you'll have a good, kind husband by then and if you write me a letter I may even reply because I will have gotten over you." The implication is that all of those events are about equally likely to occur.

To conclude, I'll quote some lyrics from Im Moment ist alles richtig which I especially liked. The song has a top-notch melody as well. "Sometimes life hits you hard. You might wish to have been spared much of what has been. But if what happened, had not happened, you would not be here today. And today, here and now, the doings of the past are nothing. For everything is perfect, in this moment all is right." And indeed, that's exactly the right way to describe listening to a new Maybebop album: in this moment all is right.

[Note: Some liberties taken with some of the German translations. All credit/blame for the translations lies with the author.]

Malcolm Gladwell recently theorized that it takes approximately ten thousand hours of practice in order to master a particular field. If this theory is true, I can only assume that Maybebop, the German quartet that consistently puts out smart, engaging, well-crafted, and diverse music passed the 10,000-hour mark several years ago. Three of their last four RARB-reviewed albums received perfect "5" overall scores, a remarkable feat by RARB standards. Weniger sind mehr has my vote to further the trend, and it's because Maybebop continues to demonstrate its mastery of so many aspects of this contemporary a cappella, nay pop music thing.

Before I go on, I should note that the reviewers for Maybebop's last three RARB-submitted albums — German Verboten, Extrem nah dran, and Endlich authentisch — have done an astute and thorough job of summarizing the group's very distinct character ("Funny, touching, quirky"), skills ("fantastic" songwriting, tuning is "virtually flawless"), and sound ("quite full" and "endlessly musical"). I'm not trying to shirk my reviewing responsibilities here, just noting that there is not a whole lot of praise left for Maybebop which has not already been lavished upon them in prior RARB reviews. That being said, I owe it to Maybebop (and you, dear reader) to give it a shot.

Though Maybebop makes a point of trying out different sub-genres of popular music, they are not so much reinventing the wheel on any one as customizing with great effect. Good songwriting translates across genres and even languages, which is why you can listen to Maybebop without understanding the German lyrics and still walk away with a series of unshakeable earworms. Popular songwriting is all about crafting hooks, and I'm not sure anybody in contemporary a cappella writes better, more consistent hooks than baritone Oliver Gies. Im Moment ist alles richtig kicks off the album with a juicy, radio-friendly rock ballad chock full of hooks, from the thickly sweet chorus to the whispering over the vocal pad in the third verse, and so much more. I could actually go down the tracklist with examples of ear candy moments from each song, but I'll save you the time — they're ubiquitous.

The mélange of styles on Weniger sind mehr is a potential trap, one which could seriously undermine the credibility of a lesser group. It is beyond audacious to follow fuzzy, G. Love & Special Sauce-ish Alles in den Genen with the gentle, lilting She's Always a Woman-reminiscent Kleiner grauer Falter, or to take the goofy, light-hearted Esst mehr Insekten straight into the dark, sultry Linkin Park-inspired Nimm mich mit. How about writing an authentic Romantic (capital R) period love song which conforms with the conventions of Schumann and Brahms in Liebesbrief and then later turning a classic Schubert lied (art song), Erlkönig, into a driving, haunting mini rock opera? Audacious and incontrovertibly successful. The title track itself is party music which crosses '70s Stevie Wonder with '90s-era R&B like This is How We Do It. This may be straying a tad far from Maybebop's wheelhouse, but it grooves just fine with many of the same brilliant arranging elements that infuse their pop and rock tracks. Maybebop doesn't have to worry about disparate song styles because every song they do, regardless of harmony, rhythm, or tonality, sounds like Maybebop.

As usual, the music is fun, funky, and catchy, and you don't need to understand German to absolutely love this album. If you happen to speak German or are willing to spend a little time translating on the web, you'll find songs gushing with love or bitter with heartbreak, along with Maybebop's trademark humor in songs about the latest dieting craze (insects!) and other satiric social commentary.

The album title, translated as "Less is More", is ironic because Maybebop continues to do it all with smart, engaging, hooky music with broad appeal and excellent singing. If you're not listening to Maybebop, now is the time to jump in with both feet, one of which will be tapping for approximately 47-minutes, and Im Moment ist alles richtig — for the moment, everything is alright.

This album is available at Maybebop's online store.