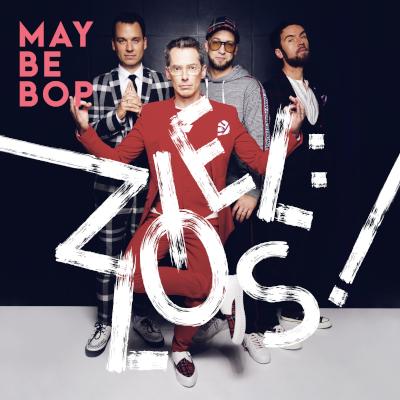 Kings of German comedic a cappella, Maybebop, are by any definition, shockingly prolific. I stopped counting at 24 major recording projects, but I'm pretty sure I missed a few. That the group records almost entirely original projects in an artform that so heavily rewards covers, is truly mind-blowing. On the group's latest, Ziel:los! (Aimless), Maybebop continues its original output. The generous sixteen-track release moves easily from style to style, finding humor in the styles, in clever wordplay and in life's quirks, both intimate and epic. The musicians don't shy away from exploring deeper, more serious experiences, but this is an uplifting group at its core. For German speakers, there is so much to love here. For others, this album might not be the right selection, as lyrics truly drive this album, and the music, while wonderful, exists to serve those lyrics. This isn't background music. You won't study to it. It's more akin to a varied concert experience, that just happens to be recorded to studio perfection.

Also funny, but more profound is Die Kreation (The Creation), a track that explores what mankind's real values are, where God stands with that and who is keeping who in power. It's another brilliant concept and the delivery is perfect.

On the truly touching part of the spectrum lies In deiner Tür (In Your Door) and Verinnerung (Recollectedness). The former is a view of a parental relationship (or so it seemed to me) literally watching from the doorway and imagining how time will alter what is between them. The latter is a heart-breaking exploration of dementia/Alzheimer's.

The album title may translate to Aimless, and perhaps that's a reference to the variety of topics and musical styles, the urge to go somewhere, anywhere, and even the malaise of middle age in a modern world. But Maybebop's sound is so identifiable, so original, so deliberate, that "aimless" hardly seems the appropriate word for anything this group does. From perfect production choices to gorgeous blend, to unstoppable writing, the singers of Maybebop always seems to know just who they are.

Despite the praise, this isn't my all-time favorite of the group's many excellent releases. The writing is still top-rate, but because the singers lean more heavily on the lyrics here than on precision singing, I find myself a bit on the outside looking in, never as fully swept up as I would have been were German my native language. But for those who speak German or who are motivated to learn, you cannot do better than Maybebop.

I've probably said this before, but Maybebop's composer Oliver Giess is a musical and lyrical genius. Part of his genius is his ability to give me things I didn't even know I needed but which I now recognize that I do. And Maybebop is so talented that the group is able to perfectly deliver on his vision. Here's a run-down of the songs on this album, which (as usual) are about a variety of comical and serious topics, in a variety of musical styles. Oh, also they are all in German.

#lautsein: In what I consider to be the "regular" Maybebop sound (fairly normal a cappella pop, what the group defaults to when not putting on some other style), this song is about speaking up against hatred and anger.

Algorhythmus: Electronic dance music about dancing (a metaphor) in step to the 0s and 1s rather than being free spirited.

Meine Klavierlehrerin: An "oom-pah" polka about a boy who falls in love with his beautiful piano teacher, complete with Mozart and Liszt sections in the middle.

Raggamuffin: A rap about going to a garden party, bringing chocolate chip/almond muffins because, well, that's all he knows how to make! This one had me rolling on the floor, calling out translated lyrics to my daughter in the other room. I mean, seriously:

The chicks and me, we're doing gym-gym-gymnastics
with my mixing bowl, made of plastic.
I'm the envy of all the bakers in Jamaica,
because my dough is not only tight, my dough is tighter.

In deiner Tür: A parent-child love song in the group's default style, poignantly pondering the separation which will surely, inescapably, come someday.

Gegen die Natur: An R&B song with a message about not judging.

Kein schöner Land: An African-style song with choruses in Swahili, about protecting and preserving our beautiful planet.

Sejeln jehn: Old time jazz sung in a Berlin dialect with which I was not familiar, but apparently they pronounce their "g"s as "j"s (which sound as English "y"s). The song title in regular Hochdeutsch would therefore be "Segeln gehn" (Going Sailing). It's about a guy whose sweetheart is coming to town on Sunday and wants to be taken boating; problem is, he doesn't know how to sail.

Der Sehne Sehnen: A modern folk song whose entire purpose is to take advantage of the play on words between "Sehne" (a tendon) and "sehnen" (to yearn for); this tells the story of a lady's tendon which falls in love with a strand of hair on her head.

Höhere Gewalt: A tango about a guy who keeps failing at various tasks due to the intervention of a "higher power", but it becomes clear by the end that everything is his own fault.

Das Beste fürs Kind: An almost boy band style song about a parent who just wants "what's best" for his daughter, such as making sure the kid always wins at games because losing might make her feel bad.

Verinnerung: A very serious song, sad and powerful, giving the perspective of a man who is losing his memory due to dementia, wondering about the people in the pictures on the walls. It's worth pointing out here that not only does Maybebop provide all the lyrics on its website, but the group also provides commentaries from Giess and sometimes other group members. Giess comments here that he composed this song after being touched by an article he read about a man who, in his mid forties (Giess's age), was diagnosed with Alzheimer's. And yet many friends turned away from the family and only offered their help after the husband had passed on — after the wife didn't need the help anymore. A sobering reminder of what's important in life.

Die Kreation: A Gothic rock song with lyrics in the style of the Biblical Genesis account ... except in this version it's man doing the creating. He creates himself, then tools, greed, suspicion, selfishness, etc., and after each creation man "saw that it was good". On the seventh day man created God, who justified all of man's other creations. Or perhaps it was the man just using the concept of God as his own justification.

Ave Maria: This is the Bach-Gounod version of Ave Maria with the countertenor singing melody. After a few lines of singing it straight, actually quite pretty, vocal percussion comes in, then syncopation, even a "wah wah". It's really cool.

Ziel:los!: Default Maybebop style again, this sounds like a motivational song but there's some clever wordplay going on. "Ziel: los!" means something like "my goal is: let's get started!". But "ziellos" means goalless/purposeless/aimless. The message is clear: if your only goal is to get started without thinking about what you're doing, then you are indeed aimless.

What can I say? I love this album. An a cappella African song about saving the planet, a rap about chocolate muffins, a barbershop song about barbershop puns, a creation story about man creating himself, a gorgeous, syncopated Ave Maria ("Blessed art thou amongst women, and blessed is the fruit of thy womb, Jesus"), are indeed all exactly what I needed.

When I see an album with sixteen songs in the track listing, I'm immediately worried. It's going to be hard to keep the listener's attention for every second. Even more so, it's going to be challenging to convince listeners that every song is truly unique while remaining in the group's style. To counteract that fear, Maybebop instead is not limited to one style. Of course, with an album name that translates to "aimless", Ziel:los! is a fitting name. Maybebop has many great songs over multiple different styles, but a lack of cohesiveness over the course of the album taints what could be a very strong presentation.

#lautsein is a great opening number to set the tone for the album. It opens slowly and pensively before exploding and releasing a far more expansive wall of sound than would be expected from the quartet. Algorhythmus gives a very different feel but is very satisfying in its own right. The sound is more digital, but with a very fun dance groove. With these first two tracks, a precedent has been set. This album is going to be inspirational, fun, and surprisingly hard-hitting for only four members, and I'm all for it.

However, once we get to Meine Klavierlehrerin, the entire story that Maybebop has laid out suddenly becomes less clear. This track becomes instead more like barbershop music (or really, Bhaarbershop). While I enjoy the barbershop style, many of these tracks feel out of place on the album. Most importantly to me, the presentation feels slightly incorrect. Barbershop music features a very specific sound with the sound so bright, you can hear the singers smiling through the speakers. When pitches and timbres are perfectly aligned, the result is chords with some absolutely breathtaking overtones. These tracks, while featuring the correct chords to be considered barbershop music, are missing that superfluous energy and blinding smiles. There are no ringing overtones to make the music sparkle and shine. After having a number of pieces throughout the album that all have this sound, the little missteps compound and become a nagging issue for the group.

And once we get past the barbershop, Maybebop introduces songs such as In deiner Tür and Der Sehne Sehnen. These tracks feature much of the same attention to tuning and blend, but the songs are more choral in nature. The result is tracks that I could listen to over and over again. When I think about Maybebop, this is the group image that comes to mind. These four individuals have amazing musicianship and attention to detail, and it shows in these tracks.

With the final moments, the title track Ziel:los! gives the listener a sendoff in the vocal rock band style. However, it raises the question of which version of Maybebop is the version to remember. It could be the vocal band that is simple and fun. It could be the meticulous choral-minded group that makes the listener stop and listen. It could be the barbershop stylings, that while not perfect, can still put a smile on your face. However, when all three are together, it's too much for one album. It might present a great show, but it's an album that is too scattered to pique my interest enough overall. Give it a listen, find something you like, and enjoy.