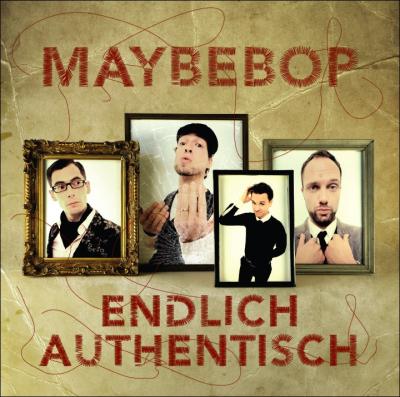 Harmonically rich. Energetic. Creative. Playful. And twenty tracks worth! Maybebop is one of the most consistently entertaining artists in contemporary a cappella, and even if you don't speak a word of German, the music alone is a terrific listen.

Now it's quite possible that the lyrics are absolutely terrible, insipid, or offensive and that only my complete ignorance allows me to enjoy the music. Well, so be it. We are an English-based site and can only judge what we have access to.

Catchy, dynamic, and endlessly musical: that's plenty good for me. Love it. Buy it.

Ah, German. The language of Bach, Beethoven, Mozart ... and Maybebop. Does Maybebop deserve to be mentioned in the same breath as those immortals? Probably not quite yet, but in the world of a cappella music, Maybebop is certainly doing their part to bring high quality German music to the masses.

This is the third Maybebop album I've been asked to review. Like the previous two albums, Endlich authentisch sounds great, has many clever lyrics, and some strange songs. The album employs very few modern effects, yet is ten times more original than the typical a cappella album that comes my way. Group member Oliver Giess composed/arranged nearly all of the twenty tracks himself.

Some of the songs are strange sounding. Stilles Lied and Ebenbild are similar, employing a gothic sound that's hard to describe, complete with a Vincent Price-like spoken part in the latter song. Another odd one is Schwarz oder weiß, which sounds like a beer-drinking polka, and is a bit out of place on an a cappella pop album. And then there's Moderne Kunst, a very short number about modern art, sung to Mussorgsky's Pictures at an Exhibition Promenade theme.

Some of the songs have strange topics. Here's some Fußball lyrics (my own translation here): "I discovered this fact about myself at an early age: I'm spiritually deficient. I was immune to every therapy. My parents asked, ‘Will the boy ever become a man?' The doctor said, ‘I can do nothing for you.' … I'm simply not interested in soccer, I've never understood what it's about. I'm simply not interested in soccer; I just find the sport primitive and plainly horrid." Another example is Ein neues Lied, an upbeat number about how they are having trouble writing their next hit — but even with their lack of ideas for the text they have confidence in the result because today's radio and TV audiences are used to consuming crap.

Some songs are both strange sounding and have strange topics. Like Boys in the bassbus, which among other things features the group trying to say "bass boy bus" (English pronunciation) in a rap number, but they fail repeatedly by slipping into German with one word or another. The pronunciation muddle gets even more confusing — and sung impressively fast! — when they add in the words "boss" and "bau's" (build it) to the mix.

I sincerely feel that this album should be required listening for all new collegiate a cappella group members, to show what is possible within the genre. Let me preach to the choirs (ha ha): You can sing in tune! You don't have to always do pop song covers! You can be creative, even writing your own songs! Your songs can be about funny topics! You can be a kick-butt group without having a kick-butt soloist! Your VP can be effective without producing the heck out of your drum sounds! Even if you haven't yet learned the language of the past classical masters, this album can help in your a cappella education.

Endlich authentisch is one of the most complete, well-rounded, and consistently awesome a cappella albums I've ever heard. It leaves you wanting nothing — except more Maybebop. Never have I heard such a full spectrum of emotions, styles, and genres executed so masterfully and seamlessly. All this, and I didn't understand a word of what they were singing.

It's no secret by now that Maybebop puts out great records. The German a cappella quartet is known for their charismatic performances, interesting arrangements, and variation of musical styles. Endlich authentisch lives up to typical Maybebop expectations, and even a bit more. They really left nothing out. Classical chamber singing? Check. Vocal trumpet solos? Check. Pop song seemingly about American movie stars? Check. Catchy tune highlighting bodily noises? … Check.

This all means nothing if the performances aren't good, but they are. Really good. As usual, harmonies are tight, the arrangements are complex, and the performances are full-bodied and energetic. But what really makes this album outstanding is the group's attention to emotion. The mood of each piece is channeled by the singers' performances. Among the most powerful is Der Mond ist aufgegangen, one of the more serious pieces, which showcases a passionate performance that is both delicate and rich. This stands in stark contrast to, say, the preceding track, Schwarz oder weiß, which features some outstanding yodeling. It's this kind of potpourri that makes this album so consistently refreshing.

Some other notable highlights: The outrageously fun instrumental breakdown in Superstar; the surprisingly edgy rapping in Boys in the bassbus; the folky toe-tapper Mona Mu; and the rich lead in Stilles Lied. There's a highlight in just about every song, but RARB tries to enforce a word limit on its reviews.

A few words about the production: You'll hear some sampling, some sparkly after-effects, and some pretty heavy bass, but it's really a non-issue. The fact is, this is still genuine a cappella in every sense, thanks largely to the overwhelming spirit that Maybebop exudes. The production does nothing but enhance the group's sound.

If you've never heard a Maybebop record, this is a good time to start. It seems that they're only getting better, so you might want to jump on the bandwagon now so you can tell all your friends at parties that you followed their music BEFORE they were big. Or maybe that's just me.