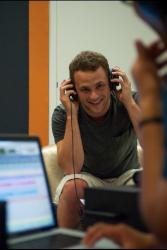 As a trumpet player, Nicholas performed in the 2011 Macy's Thanksgiving Day Parade with the Miami University Marching Band, under the direction of Dr. Stephen Lytle.

Also in 2011, Nicholas traveled to India to study and perform South Indian Carnatic music, culminating in a collaboration with Grammy Award-winning film composer, A.R. Rahman on orchestral adaptions of "Maa Tujhe Salaam" from "Vande Mataram" and "Dil Se Re" from "Dil Se".

In 2012, Nicholas had the privilege of arranging "Heaven" by Emeli Sandé for the VoCALnation Collaborative Recording. "Heaven" was tracked, edited and mixed by ACappellaPsych and Clear Harmonies, mastered by Vocal Mastering and features Cluster, Traces of Blue, Cartoon Johnny, VoxPop DC and the VoCALnation VIPs. "Heaven" is featured on the CASA Events Collaborative Recording EP Vol. 1, available on iTunes.

Also in 2012, Nicholas performed with the internationally acclaimed Miami University Men's Glee Club, under the direction of Dr. Jeremy Jones, at Carnegie Hall in New York.

In 2014, Nicholas had the honor of nominating and judging for the Contemporary A Cappella Recording Awards (CARAs).

Also in 2014, Nicholas arranged music for the feature film "Boychoir", directed by François Girard and starring Dustin Hoffman with Kathy Bates. Filming began in February of 2014.

He regularly contributes to works of vocal and intrumental music as a performer, conductor, composer, arranger, and orchestrator and has performed in venues such as Carnegie Hall in New York; the World Expo in Shanghai, China; and India's most sacred performance space, Kalakshetra.

Nicholas currently lives in Cincinnati, OH where he is chief arranger, tracking and editing engineer, and webmaster for ACappellaPsych, a full service a cappella company. Since 2008, he has written for a cappella groups around the world.