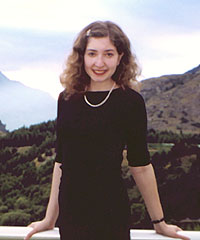 My mother had the foresight to give birth to my mezzo-soprano sister Eve twenty months before my alto arrival, so I've been harmonizing since I was old enough to toddle to the piano. Joining the Chicago Children's Choir at age seven and the Gilbert & Sullivan Opera Company of Chicago at age eleven seemed as natural as diaphragmatic breathing.

I took a crooked path from choir to a cappella. I flunked out of high school, got a GED, and worked as a museum guide, OMNIMAX projectionist, and freelance caterer before ending up at Harvard College four years later. There, I found my beloved Harvard-Radcliffe Veritones. I was alto section leader and business manager for the Veritones, and also sang with the Harvard-Radcliffe Collegium Musicum, the university's premiere mixed choir. I stuck around at Harvard for law school, where I sang tenor with the Sisters of Kuumba, an a cappella group dedicated to African-American music, and served as musical director for the Law School's Drama Society. Today, I'm clerking for a federal judge in Chicago, but I know I'll always keep my music going, too. Judging at the ICCA and writing for RARB are two ways I stay involved in a world I love...one that's much more interesting than contracts and torts!