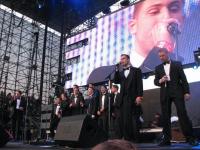 Robert Dietz is a recent graduate of Ithaca College in upstate New York where he received a dual degree in music and business. He began singing in high school when he founded the Contemporary A Cappella Recording Award (CARA) winning male quintet, Ascending Height.

During his time at Ithaca College, Robert had the pleasure of performing with and conducting Ithaca College’s only all male a cappella group, Ithacappella. Along with Ithacappella, Robert had the honor of twice advancing to the finals of the International Championship of Collegiate A Cappella (ICCAs), as well as sharing the stage with the internationally renowned rock band, Incubus. Ithacappella's 2009 release Breakdown! was produced by Dietz and garnered 4 CARA nominations in 2011, including Best Male Collegiate Album

Also at Ithaca, Robert had the honor of touring and performing with the internationally acclaimed Ithaca College Choir under the direction of Lawrence Doebler. He also began composing, and had his work premiered by the Ithaca College Graduate Choir, and the Young Men's Chorus of Ithaca. During this time he briefly served as director of the Ithachords — Ithaca's chapter of the Barbershop Harmony Society.

Outside of a cappella, Robert has enjoyed performing as a featured vocalist with ensembles worldwide in styles including Jazz, Folk, Pop, Rock, and R&B

He currently lives in Los Angeles, CA where he is a vocal coach and arranger for The Sing Off. He also maintains Human Feedback Productions, an online service specializing in a cappella arranging, producing, and recording at www.human-feedback.com.