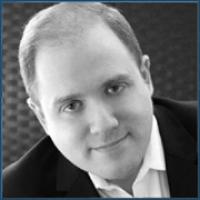 Blame The King's Singers. My mom was their agent in North America for a long time and I was hooked on a cappella from an early age. All sorts of musical activities at UPenn followed — theatrical, technical, a cappellogical — then 6 years and 2 CDs with the semi-pro Jewish a cappella sextet Beat'achon.

For the past 20+ years, I've made my living in showbiz — primarily on the theatrical side of things. Right now, I'm the Executive Producer for Triptyk Studios, which creates works for theater, film, television, the web and arts education. We’re currently represented on Broadway by The New One starring Mike Birbiglia, as well as King Kong, and we are co-producers of the much-anticipated upcoming production of Moulin Rouge! opening in the summer of 2019. Other recent credits include the Tony-winning An American in Paris and Oh, Hello on Broadway! starring John Mulaney and Nick Kroll. Our development slate includes the HBO drama "Big Dead Place"; the miniseries and Broadway musical, Freedom Run, featuring music by Stevie Wonder and based on the non-fiction book "Forbidden Fruit: Love Stories from the Underground Railroad" by Betty DeRamus; the Broadway musical To Die For, based on the acclaimed novel by Joyce Maynard; and the Broadway musical, Archie, based on the legendary comics, with Academy Award-winning writer Adam McKay and partners Funny Or Die and Archie Comics.

Prior to joining Triptyk, I served in various management capacities (General Manager, Company Manager, etc) for dozens of Broadway shows including Hedwig and the Angry Inch (for which I also served as Executive Producer of the Grammy-nominated cast album), Lucky Guy starring Tom Hanks, Nice Work If You Can Get It, The Addams Family, 13, Spamalot, Dance of the Vampires, Kiss Me, Kate, Fool Moon, and Big. Along the way, I also co-founded an independent film and theatrical production company called Ergo Entertainment, and we've co-produced ten Broadway shows, some off-Broadway, and some films, garnering a couple of Tony nominations, a Christopher Award and an Emmy nomination in the process.

In whatever spare time is left (sometimes none), I moonlight as a conductor for regional theatre productions and help out as an emergency fill-in for a few local singing groups. You might also catch me judging regional rounds of the ICCA and/or hosting a concert or giving a master class at one of the various annual CASA a cappella festivals (SoJam, LAAF, BOSS, etc).

Thanks for taking the time to check out RARB. And whether you agree or disagree with my reviews, thanks also for "listening".